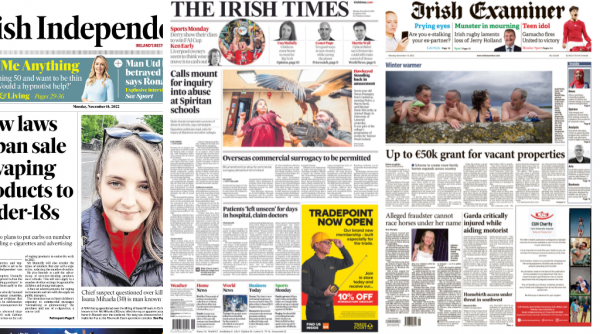 The papers on Monday are covering the killing of a 30-year-old woman in Co Meath, more fallout from the Spiritan school abuse allegations, and housing issues.

The Irish Times reports on growing calls for an enquiry into abuse allegations at Spiritans schools, after it emerged last week that 233 men have made allegations of abuse against 77 Irish priests from the Spiritans. 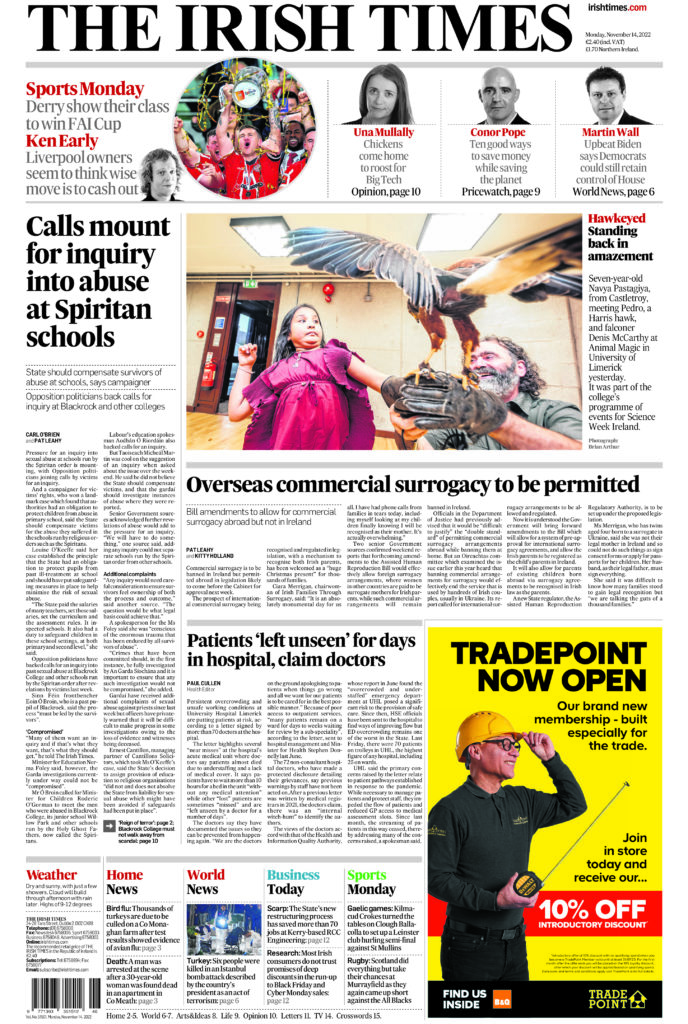 New laws will ban the sale of vaoping products to under-18s, according to the lead report in the Irish Independent, and the front page photo shows Ioana Mihaele, who was killed in her home in Co Meath over the weekend. 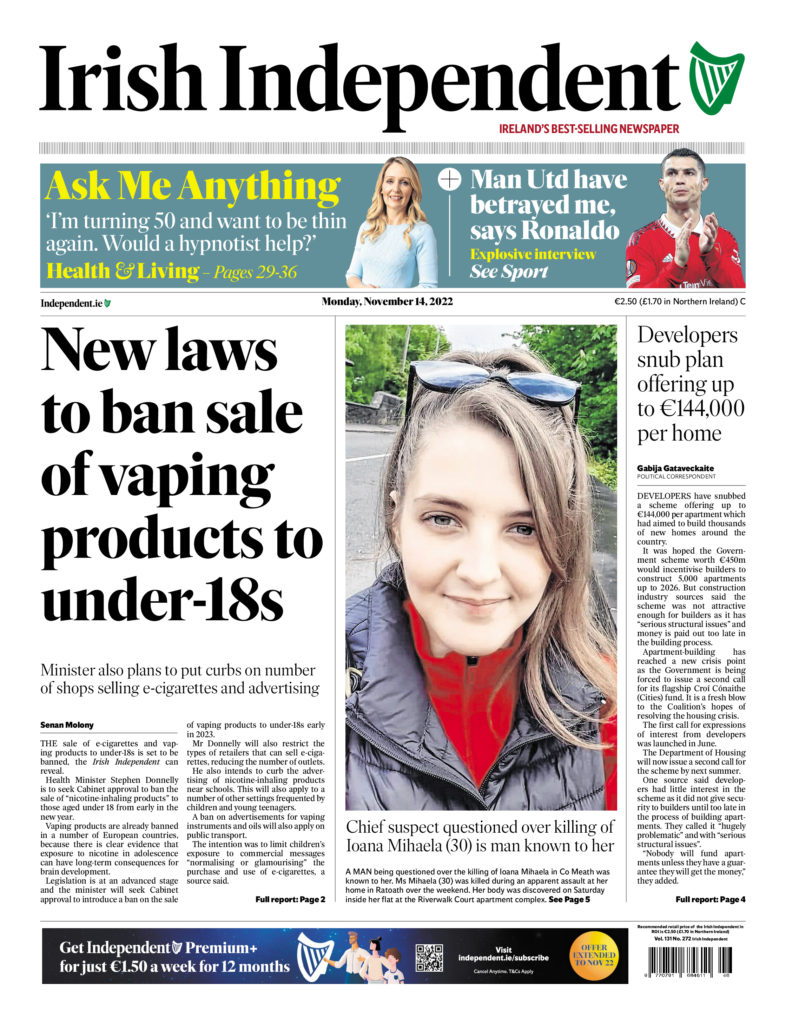 The Irish Examiner reports that grants of up to €50,000 are to be extended to all vacant properties across the country in a bid to bring as many unoccupied buildings back into use as family homes. 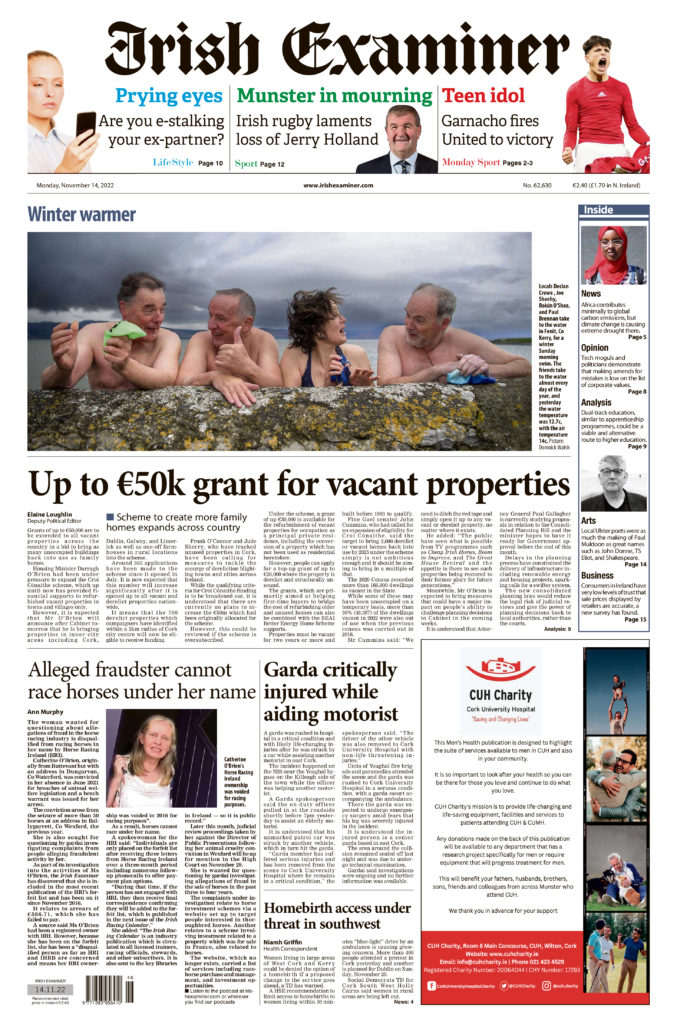 The Herald carries a report of the tributes paid to the late Ms Mihaela after an apparent assault. 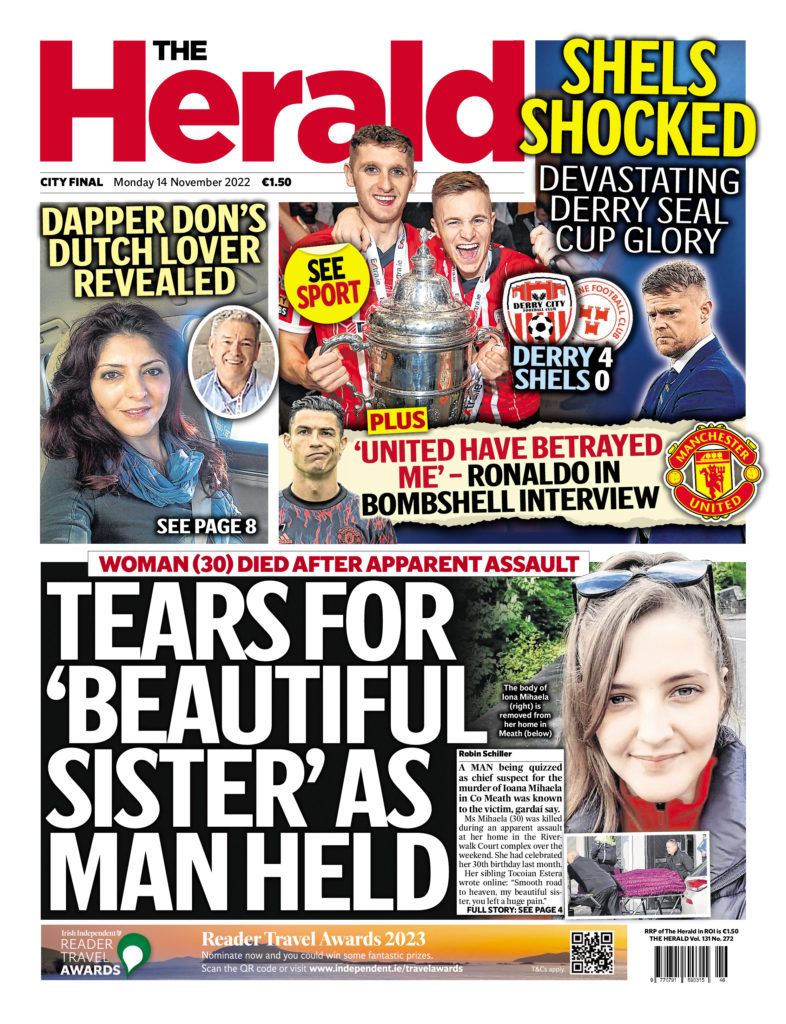 The Irish Daily Star also leads with coverage of the killing of 30-year-old Ms Mihaela in Ratoath, Co Meath.

The Echo reports that council houses are laying idle in Cork City — some for up to 75 weeks. 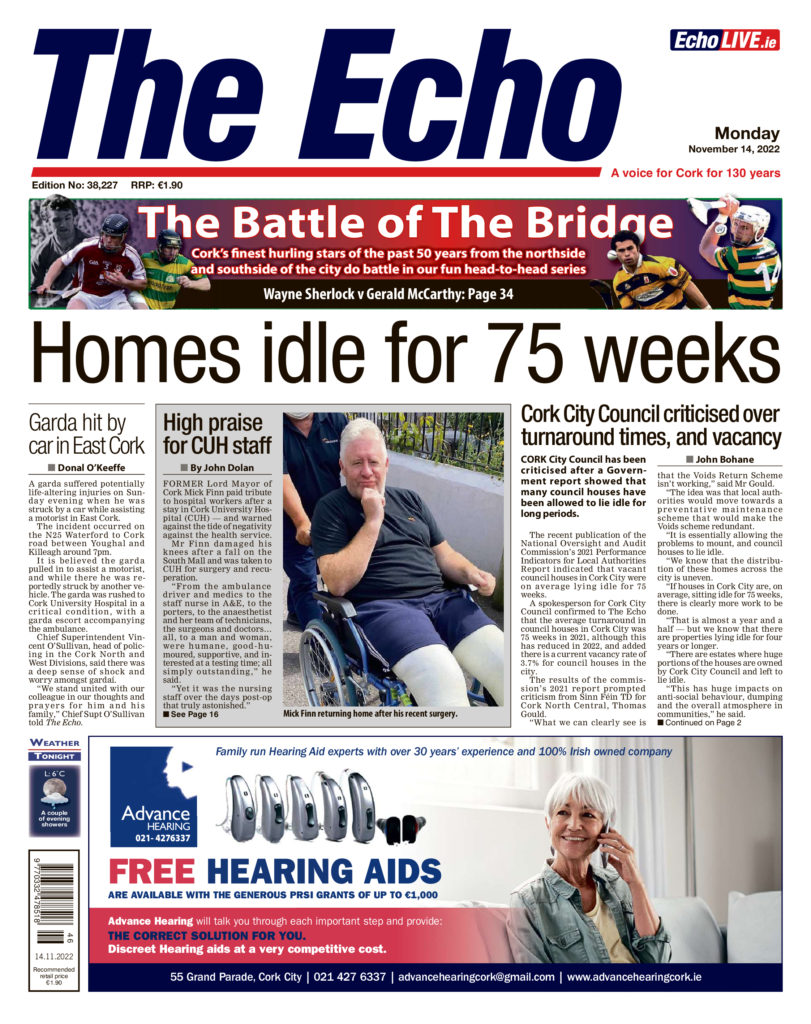 In the UK, tax cuts, the G20 and a tiff at Old Trafford are splashed across Monday’s front pages.

Metro, the i and the Daily Express lead on warnings of tax hikes from Chancellor Jeremy Hunt on Sunday, while the Daily Star says “while we’re all struggling” Parliament has spent more than £265,000 on alcohol over the past year.

Monday’s front page: Tax rises for all and energy help just for poorest#TomorrowsPapersToday

Monday’s front page: More tax for all to get UK through ‘choppy waters’ #tomorrowspaperstoday https://t.co/vSFTfevfr7 pic.twitter.com/JQTFgxVIhD

The Daily Telegraph leads on an op-ed from the Prime Minister on the eve of the G20 in which he calls Russia a “rogue state”.

The front page of tomorrow’s The Daily Telegraph:

Football star Cristiano Ronaldo is front page of The Sun claiming Manchester United has betrayed him.

On tomorrow’s front page: ‘Disrespectful Man United have betrayed me and made me a black sheep,’ says Ronaldo in explosive Piers Morgan interviewhttps://t.co/HHFZXIYU9n pic.twitter.com/z2UIEmBreM

The Daily Mirror, The Guardian and the Daily Mail all splash on dire reports into hospitals and the health system in the UK.

Monday’s front page: Last chance to save our NHS.

More than 100,000 asylum seekers have waited more than three years for a decision, according to backlog analysis on the front page of The Independent.

The Times leads on a new deal expected to be signed with France on Monday to “stem flow of migrants” crossing the Channel into Britain.

THE TIMES: New pact with France to stem flow of migrants #TomorrowsPapersToday pic.twitter.com/lFQOwH5ISN

And the Financial Times continues with coverage of the crashing of the cryptocurrency market.