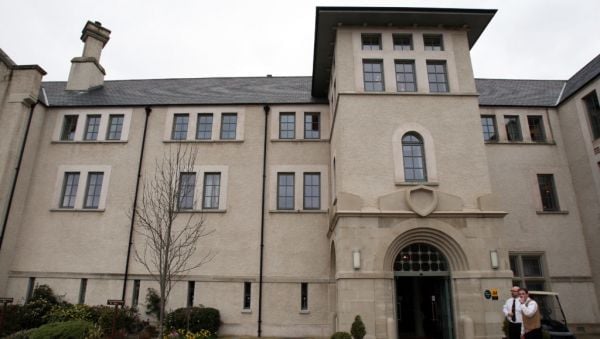 A Dublin man has appeared in court on charges connected with an altercation after protesters disrupted a political conference at a luxury Co Fermanagh hotel.

Daniel Comerforde (34), from Mic Uilliam Heights in Dublin, appeared at Omagh Magistrates’ Court where he was charged with damaging a glass door at the Lough Erne Resort in Enniskillen on Sunday and possessing a hammer as an offensive weapon.

He further faced charges of affray and attempted grievous bodily harm with intent.

Violence flared at the hotel on Sunday when protesters disrupted a political conference being held by the anti-immigration National Party.

Two people were treated at the scene for their injuries and four others were taken to hospital.

Comerforde appeared in court on Tuesday via videolink, where he replied “Yes” when asked if he understood the charges.

A PSNI detective constable connected the accused to the charges.

Defence solicitor John Finucane said there was no application for bail, but indicated one would be made later in the week.

Comerforde was remanded in custody to appear in court again via videolink on Friday.

The Lough Erne resort released a statement apologising to guests for any inconvenience and thanking emergency services for their response.

The statement continued: “Please be advised that this was an isolated incident and it is business as usual at the resort with guest check-ins taking place as normal.”