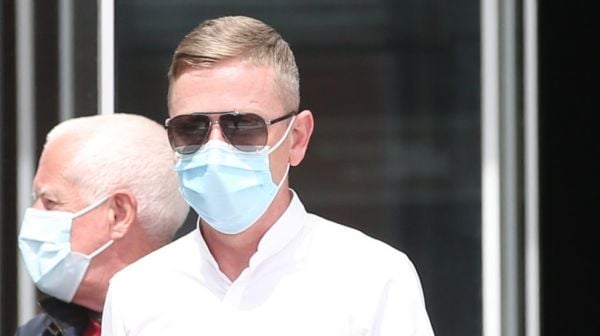 Earlier, the non-jury court heard from defence counsel that gardaí destroyed records from a tracking device that had been placed on Dowdall’s Toyota Land Cruiser when he is alleged to have driven murder accused Gerard Hutch north for a meeting with republicans in the aftermath of the shooting.

Brendan Grehan SC, defending Mr Hutch said that, “disturbingly”, the notes were destroyed after his client was arrested and charged with the murder of Mr Byrne. Counsel said the destruction of these records was a “real problem” and he did not accept the State’s assertion that it was done in accordance with the Criminal Justice Surveillance Act 2009.

Retired Special Detective Unit Inspector William Hanrahan said on Monday that he was aware that Dowdall’s vehicle had a tracking device on it when he drove Gerard Hutch across the border two weeks after the murder of Mr Byrne.

Giving evidence on Tuesday, retired Detective Superintendent William Johnston, who was previously head of the National Surveillance Unit (NSU), told Mr Gillane that he received information on February 16th, 2016 from Detective Superintendent Ciaran Hoey for the approval to deploy a tracking device on Dowdall’s Land Cruiser in relation to the investigation of the murder of Mr Byrne. Mr Johnston said he gave approval on February 16th to deploy the tracking device on the vehicle for a period of two months.

Mr Johnston said he believed there was a requirement to carry out surveillance by deploying an audio device in a vehicle owned and used by Jonathan Dowdall to assist and gather evidence into the investigation of the offence. He said he applied for authorisation to the District Court on February 17th, 2016 to employ audio devices on Dowdall’s grey Toyota Land Cruiser with a view to “monitoring” the conversations of Dowdall and his associates.

He said one of the grounds for seeking authorisation of the audio device was that he had received intelligence that Dowdall had travelled to Derry on January 5th, 2016 to meet who the witness described as Martin McLoone of the RIRA from the Abercorn Road in Derry.

He also said that intelligence suggested that Dowdall had brought Gerard Hutch to Derry on January 18th, 2016, and the men were both persons of interest in the murder of Mr Byrne.

The witness said that Dowdall’s car was being used by Jonathan, his father Patrick, members of an organised criminal group and their associates to travel to meetings.

He went on to say that Jonathan and his father Patrick had travelled to Northern Ireland where they met the Continuity IRA on February 11th 2016. “The audio was for the purpose of recording the conversations of the occupants in relation to their activities as members of an organised criminal group,” he added.

He was granted authorisation to bug Dowdall’s SUV from February 17th to April 16th, 2016 to allow the full monitoring of the alleged activities of the organised crime group and to enter it “by reasonable force” to install and withdraw the audio-recording device.

Under cross-examination, Mr Grehan asked Mr Johnston if there was any reason why he would not have told the District Court judge that he had already approved the deployment of a tracker and a logger on Dowdall’s vehicle 36 hours earlier before asking him to deploy a third device on it. “There is no reason why I didn’t do that,” he replied.

When asked by Mr Grehan what had happened to the records of the tracker and logger devices in the case, Mr Johnston said he believed they were unavailable. “Is there some policy that would enable records of the tracker to be destroyed on February 7 this year when a prosecution was listed for this court?” asked Mr Grehan. The witness said that the policy would suggest that those records should be available to State counsel.

Earlier, Mr Grehan challenged a claim of privilege by members of the NSU in not disclosing the date that a tracking device was deployed on Dowdall’s SUV before his journey to Northern Ireland with Mr Hutch on February 20th, 2016.

Fiona Murphy SC, prosecuting, said the authorisation for the approval of a tracker on Dowdall’s Land Cruiser had been disclosed to the defence and that there had been physical surveillance by the PSNI of the vehicle when in Northern Ireland. She said that the only thing over which privilege was claimed was the date of the deployment of the tracker and the date it ceased use.

Mr Grehan said the defence had been told that surveillance was carried out on the vehicle by the PSNI on a particular date. “We are told there isn’t a shred of paper in relation to any interaction in respect of that and that is a matter I intend to probe further,” he added.

Mr Grehan said the tracker had been a “live issue” before the trial started and continued to be so throughout the NSU evidence. He said the defence received a statement from a Superintendent last Friday to say that a tracker was used on the Land Cruiser between February and May 2016.

The barrister said no further details whatsoever were given and his solicitor had written to the prosecution yesterday wanting to know what date the tracker was deployed, who approved it, a copy of the written record and the notes kept.

Mr Grehan said the defence received a letter yesterday stating that An Garda Siochana claimed privilege over the date when the tracker was deployed on the grounds of risk to life. He submitted that this was “a boilerplate response”.

Counsel said he only had interest in knowing “one thing” – when the tracker was deployed – which he needed to know for the purpose of making an argument regarding the audio recording.

Mr Grehan said “a separate issue” had arisen which the defence would meet “head on”. He said for the first time yesterday the defence were told that all records of the tracker had been destroyed and “of what information was gleaned from it”. “More disturbingly still we were told [this happened] during the currency of this prosecution, not the trial, since Mr Hutch was brought before the court,” he added.

Counsel said: “We were told on Friday that the PSNI had involvement beyond providing CCTV, we have been told no records or notes have been kept in relation to this which we see as somewhat extraordinary if there was such involvement and liaison”.

Ms Murphy told the three judges that all she could say was the tracker was in use since February and was authorised to be removed in late April 2016. She went on to say that it was in accordance with the act.

Det Supt Lynch confirmed that a tracker was deployed on a Toyota Land Cruiser registered to Jonathan Dowdall and that there was no recorded data around those movements. Ms Murphy said the court would hear evidence from Detective Superintendent Ciaran Hoey in relation to the order in accordance with the act.

The witness said he was aware of surveillance around Dowdall and his vehicle on February 20, 2016 and that he received sensitive intelligence that he had travelled north. He also agreed that he was in contact with the PSNI concerning the movements of Dowdall in and out of Northern Ireland on that day.

Under cross-examination, Mr Grehan told Det Supt Lynch that he was looking for nothing more specific than the date which the tracker was fitted to the SUV. The detective said he did not know the exact date when the tracker and logging devices were deployed.

The witness was asked if was able to say beyond the dates between February and May 2016, why he could not give any further information as to when these devices were deployed. “We have disclosed 10am on February 16 when Det Supt Johnston issues the approval,” he said.

He went on to say that the authorisation for the tracker was in February 2016 and it was also deployed the same month. In reply, Mr Grehan said he would expect that officers would have been “hotfooting” it into deployment mode once they got the authorisation.

Dept Supt Lynch said a tracking device was on Dowdall’s SUV when it travelled north on February 20th. He said that PSNI were conducting surveillance on the vehicle in the North and that gardaí were doing the same south of the Border.

Mr Grehan confirmed to the judges that having established that the tracker was in place on the Land Cruiser on February 20th after being authorised on February 16th, he had no interest in the intervening period.

He added: “So it’s absolutely clear, I think there is a real problem with the notes being destroyed and I don’t accept that it was done in accordance with the Criminal Justice Surveillance Act 2009 so I do want Det Supt Hoey”. Det Insp Hoey is expected to give evidence on Wednesday.