Manchester United’s owners do not care about the club, says Cristiano Ronaldo 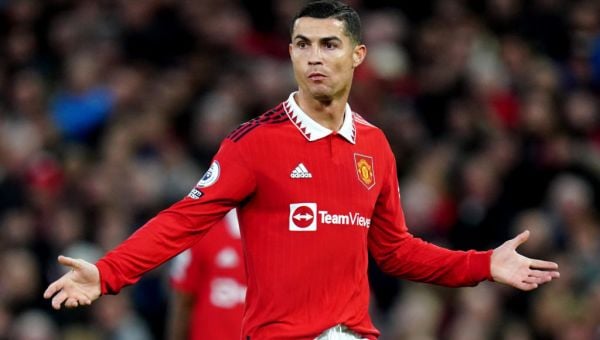 Cristiano Ronaldo has claimed Manchester United’s owners, the Glazer family, do not care about the club.

The 37-year-old continued to wage war against United in an explosive interview with TalkTV.

Ronaldo insists he does not speak to the family, who have owned United since 2005, and they do not have the club’s best interests at heart.

“The Glazers, they don’t care about the club. I mean, professional sport, as you know, Manchester is a marketing club,” he said.

“They will get money from the marketing – the sport, it’s, they don’t really care, in my opinion.

“This is why I love this club. But you have some things inside the club which don’t help Manchester (United) reach the top level as (Manchester) City, Liverpool and even now Arsenal, for example.

“Which is complicated, it’s difficult. It’s hard, in my opinion, it will be hard for Manchester (United) to be in the top of the game in the next two, three years.”

The Portugal international also rounded on former teammates Wayne Rooney and Gary Neville after criticism from the pair recently.

“I don’t understand. You should ask this question to him (Rooney) but I don’t know, why he criticises me so bad,” he said.

“He finished his career in (his) 30s. So, I’m still playing high-level. I’m not going to say that I’m looking better than him, which is true, but…

“It’s hard to listen to that kind of criticism and negativity from people who play with you, for example, Gary Neville, as well.

“People can have his (their) own opinion, but they don’t really know what’s going on. For example, inside the training ground and Carrington or even my life. They have to listen to my point of view as well. Because it’s easy to criticise but if you don’t know the whole story, it’s easy.

“They are not my friends.”

Ronaldo hit the headlines on Sunday night after the first excerpts of a 90-minute interview with Piers Morgan Uncensored were released.

Ronaldo claimed United were trying to force him out of the club and criticised boss Erik ten Hag, but he has now turned his attention to international matters after joining up with the Portugal squad.

The World Cup gets under way on Sunday, although Euro 2016 winners Portugal, who are in Group H, do not begin their campaign until November 24th.

In a message posted on social media, along with a photo of him and some of his international teammates, Ronaldo said: “Total and absolute focus on the work of the national team.

“A united group, towards a single objective: to fulfil the dream of all Portuguese people!”

Further clips of Ronaldo’s interview were released on Monday in which he explained why he did not go on United’s pre-season tour to Australia in July.

He revealed partner Georgina Rodriguez and baby daughter Bella Esmeralda were hospitalised with a “big problem”, only a matter of months after the death of their newborn son, but claimed he was not fully believed by the United hierarchy.

“They didn’t believe that something was going wrong.”

Cristiano Ronaldo has told Piers Morgan he felt doubted by his Manchester United bosses when he told them his newborn daughter was sick.@cristiano | @piersmorgan | @TalkTV | #PMU pic.twitter.com/Y2jDLFR62J

“I spoke with the director and the president of Manchester United and they kind of didn’t believe that something was going wrong, which make me feel bad,” Ronaldo told Piers Morgan Uncensored.

“I am never, ever going to change the health of my family for a football. Never. Now or 10 years behind or forward, and it is something that really hurt me because they doubt my words.

“That I struggle, especially Bella and Geo who had one week in hospital because of a big problem and I didn’t go to the pre-season tour because of that.

“I think it was not fair to leave my family for the pre-season. This is why I didn’t go.”

A statement from the club, released on Monday afternoon, read: “Manchester United notes the media coverage regarding an interview by Cristiano Ronaldo. The club will consider its response after the full facts have been established.

“Our focus remains on preparing for the second half of the season and continuing the momentum, belief and togetherness being built among the players, manager, staff, and fans.”