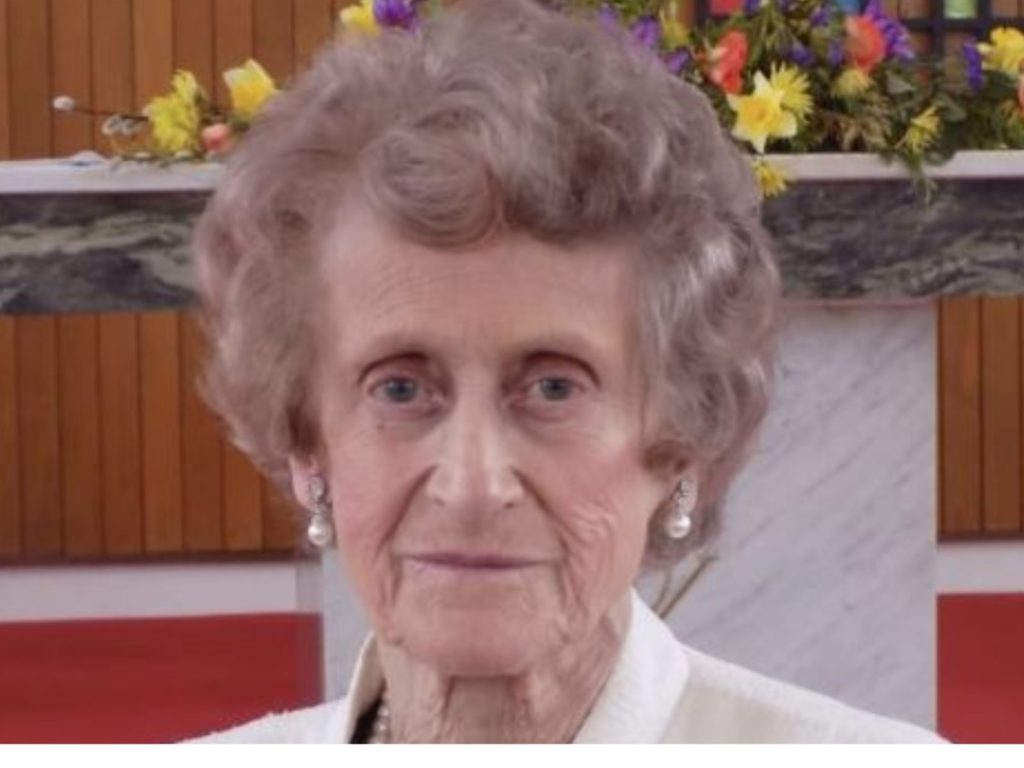 MARGARET Mullins, Coolnariska, Killeshin, whose death occurred peacefully at the home of her son Brian on Thursday 24 October surrounded by her loving family, had served as sacristan at the Church of the Holy Cross, Killeshin for 33 years.
Born on 13 April 1941, the former Margaret Cummins was a native of Kilree, Bagenalstown, Co Carlow. She was daughter of the late Tom and Bridie (née Barron) Cummins and one of a family of 13 – eight girls, five boys. She was the fourth member of the Cummins family to pass away.

Educated at primary and secondary levels in Bagenalstown, Margaret trained as a psychiatric nurse in St Dympna’s Hospital, Carlow, where she was a valued member of the nursing staff up to her marriage in 1970. At that time, the marriage ban on females in the public service was in existence, which meant Margaret had to give up her nursing career.

She met Pat Mullins from Coolnariska at a dance and they married in 1970. Pat was a part-time farmer, who also worked as a van driver with Brennan’s butchers, Dublin Street, Carlow for a number of years, before driving for the Buttercrust bread company in the Carlow/Laois area. Pat predeceased Margaret in October 2011 at the age of 67.

The couple had over 40 years of happy marriage in Coolnariska, during which Margaret always kept in touch with her family with regular visits to Kilree, Bagenalstown.

As sacristan, Margaret served the parishioners of Killeshin in a commendable manner, looking after her duties at the Church of the of Holy Cross with great diligence on a daily basis and always ensuring fresh flowers for the altar.

That contribution was fully acknowledged by her great friend Fr John Dunphy, PP, Graiguecullen-Killeshin in a homily during Margaret’s funeral Mass in the church on Sunday 23 October. Fr John spoke in great praise of a woman who had been such a tower of strength in the smooth running of church affairs in Killeshin over such a long time.

The significant symbols of Margaret Mullins’s life brought forward by her greatly cherished six grandchildren at the start of Mass spoke of a woman of many talents.

The symbols were: a deck of cards – Margaret was a keen card player and loved a game of 101 rummy with her sisters and her late mother Bridie; her bingo board – Margaret regularly played bingo with her sisters and friends in Graiguecullen and at Carlow Youth Centre; a ball of wool, reflective of her skill at knitting, first by hand and later by machine, providing garments for her three sons; a bag of flour symbolised Margaret’s skill at cooking, her culinary trademark being her wonderful white baked bread; a book of crosswords reflected her love of the art of doing crosswords, at which she had a high degree of expertise; and a photo of the Church of the Holy Cross, which signified her 33 years of loyal service as sacristan in Killeshin.

Readings at Mass were by Richard (Dick) Mullins (brother-in-law) and Colleen Scully (niece), while Prayers of the Faithful were recited by Michelle Cummins (niece). The bringing forward of the Offertory gifts was by Margaret’s three daughters-in-law Deirdre Mullins, Olivia Byrne and Debbie Mullins. The wonderful singing of hymns at Mass was by Caitríona Kelly (Killeshin).

Following Mass, Margaret was laid to rest with husband Pat in the adjoining cemetery, with Fr Dunphy reciting the final prayers at the graveside.

The Month’s Mind Mass for Margaret Mullins will be celebrated in the Church of the Holy Cross on Sunday 20 November at 10.30am.