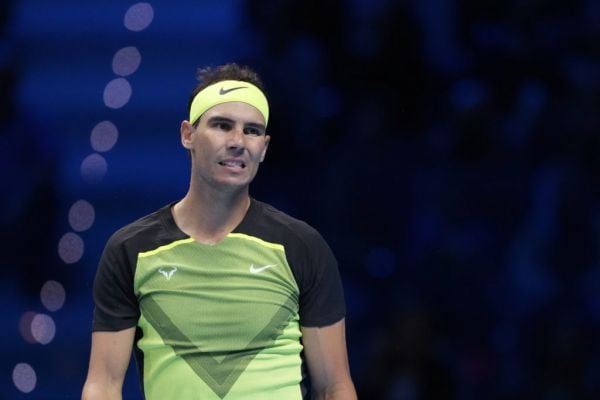 Rafael Nadal’s qualification hopes at the ATP Finals were all but ended with a straight-sets loss to Felix Auger-Aliassime in Turin.

Nadal began the week with a chance of finishing the year ranked world number one but he suffered an opening loss to Taylor Fritz and was beaten 6-3 6-4 by Canadian Auger-Aliassime on Tuesday.

The Spaniard still has a slim chance of reaching the semi-finals should he beat Casper Ruud in straight sets in his final group match and all other results go his way, but Nadal has been well below his best so far.

A win to remember! 👏

The moment @felixtennis recorded a first career win vs Nadal with a 6-3 6-4 victory over the Spaniard#NittoATPFinals pic.twitter.com/5xkMhEJSUc

There was the jarring sight of Toni Nadal, the guiding hand in his nephew’s career for so long, sitting in Auger-Aliassime’s box, with the young Canadian currently under his tutelage.

It was Nadal who threatened a break in the early stages but the 22-time grand slam champion then faltered in the eighth game, throwing in more of the errors that marred his performance against Fritz.

Auger-Aliassime, who lost to Ruud on his debut on Sunday, moved ahead again early in the second set and produced a strong serving display to boost his hopes of reaching the last four.

Having won the Australian Open and French Open in the same year for the first time, Nadal’s 2022 season is now ending with a whimper, and he must try to avoid a fifth successive loss when he takes on Ruud on Thursday.