UK does not yet see route through Northern Ireland Protocol issues 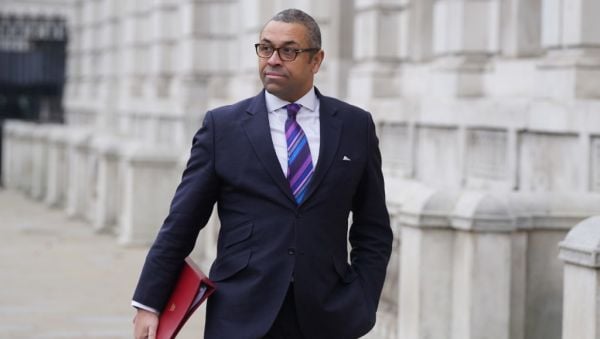 British foreign minister James Cleverly said on Tuesday he did not yet see a route for the resolution of problems with post-Brexit trade rules for Northern Ireland.

Cleverly told a committee of lawmakers that while there was a better atmosphere around talks with the European Union on the so-called Northern Ireland protocol, it would not be easy to address all the issues.

“I don’t yet see a route through that. We’re still looking and if we can find one I’m very, very happy to, but those concerns are there,” he said.

Technical talks resumed in early October for the first time in seven months on the protocol, the part of the Brexit deal that mandated checks on some goods moving to Northern Ireland from Britain due to the region’s open land border with the Republic.

Cleverly said the two sides were working on establishing mutual trust and he hoped some issues could be resolved by looking at the “pragmatic reality” of what happens on the ground in the North rather than focusing on theoretical risks.

“A good working relationship, regular conversations, goodwill and trust are necessary but not sufficient,” he told the committee.

“We shouldn’t rush to the conclusion that therefore everything’s about to come good, because there is still serious work to do and there are still big gaps.”

Earlier on Tuesday, Minister for Foreign Affairs Simon Coveney said he believed a deal could be done between Britain and the EU before the end of the year.

“There are encouraging signals now from the British government that they are serious for the first time in many, many months about trying to work this out through dialogue and discussion.”

British prime minister Rishi Sunak on Thursday said he was pleased with the progress made so far.

If Britain shows “real intent” to solve the issue through gestures like the sharing of real-time trade data, the EU will respond with generosity, Coveney said.

The two sides are working to take advantage of a “window of opportunity” created by the delay in Northern Ireland elections until at least March, he said.

“We need to use this window now to try to resolve these issues once and for all,” said Coveney, who said he had feared an election might have made it harder for unionist opponents of the protocol to back a compromise.

A deal could allow for the restoration of powersharing government in Northern Ireland in time for the 25th anniversary of Northern Ireland’s 1998 peace deal in early April, Coveney said.