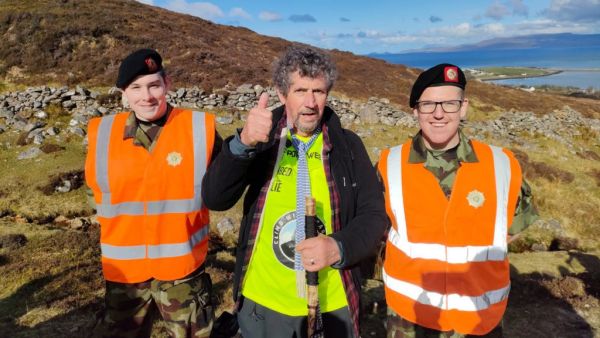 Veteran broadcaster Charlie Bird said cervical cancer campaigner Vicky Phelan was his Samaritan – as he described her as an “incredible human being”.

Ms Phelan, who died on Monday, eight years after being diagnosed with cervical cancer, struck up a friendship with Bird after his motor neurone disease diagnosis.

Bird was speaking at the launch of the Samaritans impact report for 2021, which found there were over 1,300 calls to its phone line a day across the island of Ireland, with around a fifth of calls about coronavirus-related concerns.

The busiest day of the week was a Tuesday, and the busiest time of the day was between 6pm and midnight, the report showed. A call needing emotional support lasted an average of 33 minutes.

Minister for mental health and older people Mary Butler praised the volunteers manning the phone line, saying it is “phenomenal” they gave 160,000 hours of their time last year.

Speaking with the aid of voice technology, Bird said the report in “very stark terms” shows the importance of the Samaritans’ “incredible” year-round work.

“In this very difficult period, many, many people find themselves in dark places. It is vital that Samaritans are there to listen without passing judgment.

“I have promised myself – as long as I’m alive – I want to extend the hand of friendship, and some guiding spirit directed me in the direction of Samaritans, who are an incredible group of people.

“You are all providing a crucial service to people who are in dark places. And so I really want to raise awareness for the important service Samaritans play for everyone.

“Obviously, family and friends provided for me that listening ear, but in a way that Samaritan I turned to was Vicky Phelan, who I kept in contact with over the past 12 months. She was an incredible human being and, yes, in a way, she was that Samaritan for me.

“I want to end by just saying: sometimes in this life we all need a shoulder to cry (on), for that friendly listening ear provided all around the country. Keep strong and keep extending the hand of friendship.”

Samaritans is the only 24-hour emotional support helpline covering the island of Ireland, with more than 2,000 volunteers in 21 branches nationwide.

It aims to provide support for anyone struggling to cope and to ensure fewer people die by suicide. More than 600 people die from suicide on the island of Ireland each year.