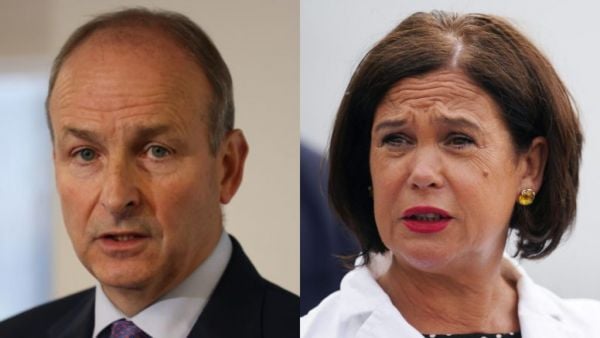 Another fiery exchange between the Taoiseach and Sinn Féin leader took place in the Dáil chamber, after the Government admitted it is revising its housing targets.

The Government has stressed that it will exceed its targets to provide 24,600 new homes by the end of the year, and says it will increase the target to 29,000 homes next year.

On Tuesday, the Minister for Housing, Darragh O’Brien, said the Government “won’t be happy” until there is an average of 33,000 new homes being provided a year, with about 40,000 needed to meet demand.

Accusing Sinn Féin of being a “party of catastrophe”, Micheál Martin said that “progress is being made, but I’m very clear that we need to make more progress than that”.

Ms McDonald said a generation had been “locked out of affordable housing”, and read out examples of the types of difficulties people had in accessing accommodation.

“Over the past four days, I’ve received literally an outpouring of despair from people whose crisis housing situation is badly affecting their mental health.

“Amy told me: ‘I’m a 40-year-old married nurse. We couldn’t afford to rent anymore. We had to move in with my parents to try to save for a mortgage, but now the cost-of-living crisis has ruined things. Only for my parents, I couldn’t afford to continue living. I am constantly sad and stressed.’

“Sean’s story: ‘I’m with my partner of over six years, were living at home with their parents and sister in a three-bedroom house. No room. We want to have kids, but where would we put a baby? This is not a life. We both work full time, we pay our taxes. We want to start our life, but we can’t. My depression is real and it’s only getting worse.’

“Edel says: ‘I’ve been homeless since the start of 2020, going from house-to-house, room-to-room. We’ve lost our furniture. We’ve lost our clothing. We’ve lost the feeling of having a home again. I am mentally exhausted and the whole family has been dealing with tough mental health issues. This isn’t normal, this isn’t right.’”

“The answer to the housing catastrophe is not to roll out the red carpet to vulture funds & cuckoo funds, or to build houses and accommodation that is way out of reach to ordinary, average workers and families” – @MaryLouMcDonald #Dáil #LeadersQuestions #HousingCrisis pic.twitter.com/DxgQdeGVMN

He accused Sinn Féin of wanting to scrap schemes currently in place that had helped some people to buy homes – such as the Help-to-Buy Scheme which he said had helped 35,000 homebuyers, and the shared equity scheme which has 640 approvals.

“What would you say to the James, the Mary and the John who’ve got those approvals?

“You’ve consistently now, you’ve become the party of catastrophe. That’s how you label yourself,” he said, before accusing Ms McDonald’s party colleagues of opposing the building of housing developments.

Ms McDonald responded: “I think it’s a measure of just how far astray you’ve gone and just how badly you’re failing that you rely on misinformation and attacks across the floor rather than acknowledging in the first instance the very real mental health consequences for what is a housing catastrophe and a housing emergency.”

The Taoiseach said: “Objectively, people have to acknowledge that progress is being made.”

Mr Martin admitted that “we have to do more than what has done already”, but said 40,000 homes a year cannot be built if housing developments are being objected to across the country.