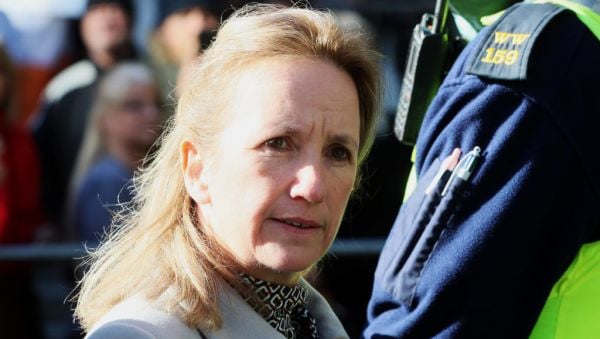 Former journalist Gemma O’Doherty has been convicted and fined in her absence for breaching Covid-19 regulations by leaving her home in Dublin and travelling to Cork in December 2020 for an anti-lockdown protest.

Cork District Court heard evidence from Sgt Tim McAuliffe who told Judge Marian O’Leary that the 54-year-old was among a group of people at an anti-restrictions protest on Grand Parade, Cork city, on December 12th, 2020.

He said the group of people were holding placards about the Covid lockdown in which they were encouraging the public not to wear masks.

He said at 4.25pm on the date of the protest O’Doherty addressed the crowd.

Sgt McAuliffe said that O’Doherty, of Shankill in Dublin, addressed the group on the subject of the lockdown. She insisted the virus was a “hoax” and that “RTÉ was spreading lies on behalf of the Government” about Covid.

He said the group then went outside the studios of RTÉ Cork before heading to the office of Taoiseach Micheál Martin on Evergreen Road in the city.

Sgt McAuliffe said the group then went back into Grand Parade in the city centre. Shortly after 7pm he engaged with 54-year-old O’Doherty and asked her if she had a reasonable excuse to leave her county.

Sgt McAuliffe said that O’Doherty began recording him telling him that he did not know the Constitution or his oath and that she was on “essential duties”. He stated that from what he observed she was not carrying out any journalistic duties and was instead actively engaging in protest at the restrictions in place in the country.

Meanwhile, Det Garda Steven Dennehy, of the Scenes of Crimes Unit, said he took pictures at the scene of the protest. He told Judge O’Leary that O’Doherty addressed the crowd, and that footage of the protest was subsequently put online by those in attendance. A small snippet of footage was played in court.

Garda Dennehy said he arrived at the Grand Parade at 2.50pm on December 12th, 2020 and took a series of photographs of people who were in attendance at the protest. He took 137 photographs including images of O’Doherty addressing the crowd.

Inspector Ann Marie Guiney said O’Doherty had claimed that she was present in Cork for “essential journalistic services”.

She stated that such a claim was not a reasonable excuse for travelling from Dublin to Cork, and that O’Doherty was not in Cork in an independent capacity to report but was instead a participant in the protest.

Inspector Guiney said O’Doherty had left her county contrary to the Covid restrictions that were in place at the time. The court heard that O’Doherty had three previous convictions.

O’Doherty did not have legal representation in court. At the start of the case Judge O’Leary asked if the defendant had been notified of the hearing. She was told that O’Doherty had been informed of same. The name ‘Gemma O’Doherty’ was called out outside the courtroom to ensure that she was not in attendance in the body of the courthouse.

Judge O’Leary convicted and fined O’Doherty €750, giving her five months to pay the amount. O’Doherty was convicted of breaching a penal provision of a regulation made under Section 31 (A) of the Health Act, 1947 as amended to prevent, limit, minimise or slow the spread of Covid-19.