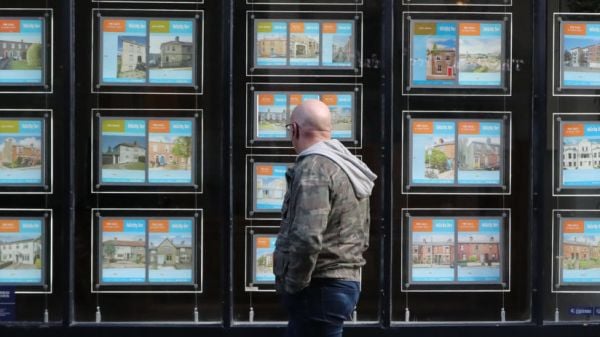 Residential property prices rose by 10.8 per cent in annual terms, down from an annual increase of 12 per cent in August, according to the latest figures from the Central Statistics Office.

In Dublin, residential property prices saw an increase of 9.4 per cent, down from 9.8 per cent in August, while prices outside Dublin were 11.9 per cent higher than a year earlier.

The region outside of Dublin that saw the largest rise in house prices was the west (Galway, Mayo, Roscommon) at 16.9 per cent, while at the other end of the scale, the southwest (Cork, Kerry) saw a 9.5 per cent rise.

In September, 4,583 dwelling purchases by households at market prices were filed with the Revenue Commissioners, an increase of 6.5 per cent compared with the 4,304 purchases in September 2021.

Households paid a median or mid-point price of €299,500 for a residential property in the 12 months to September. The lowest median price paid for a dwelling was €148,500 in Longford, while the highest was €615,000 in Dún Laoghaire-Rathdown.

The figures come as the European Central Bank on Wednesday warned that property markets may be “at a turning point” as the rise in borrowing costs dents demand for new loans.

Last month the ECB raised its rate on bank deposits to 1.5 per cent, and has signalled further rate increases in coming months.