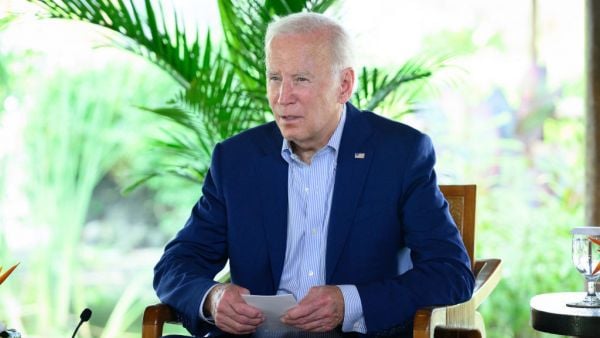 Asked if the US president raised concerns about the Northern Ireland Protocol Bill specifically, the UK Prime Minister’s press secretary said: “Not specifically, no”.

Pressed on whether he did about the Northern Ireland situation general, she said: “Yes.”

“They both expressed their commitment to protecting the Good Friday Agreement,” she said.

She added that the UK Prime Minister “expressed his desire to get a negotiated settlement and to ensure that the Good Friday Agreement is protected.”

Biden and Sunak both “affirmed their shared commitment to protecting the gains of the Belfast/Good Friday Agreement” during their talks in Bali, the White House also said.

The US readout of the meeting in the margins of the G20 summit said the two leaders “discussed Russia’s barbaric missile strikes in Ukraine and underscored their governments’ strong support for Ukraine as it defends itself against Russian aggression”.

“They also discussed the explosion that took place in the eastern part of Poland and our full support for Poland’s ongoing investigation.

“The leaders co-ordinated on a range of global issues, including the challenges posed by China.

“They discussed the global need to step up ambitions to tackle the climate crisis, as well as the importance of securing sustainable and affordable energy supplies.

Rishi Sunak said he wants to reach a negotiated settlement on the Northern Ireland issues by the anniversary of a peace agreement next year.

Speaking about the Prime Minister’s meeting with US President Joe Biden at the G20, his press secretary said Sunak had referred to next year’s 25th anniversary of the Belfast Good Friday Agreement and “ensuring that we get a negotiated settlement that protects the Good Friday Agreement by then”.

Positive meeting with @POTUS today, our strong relationship is important for international challenges the world is facing.

We will work together, and with allies, to address the economic consequences of Putin’s brutality. pic.twitter.com/YZxdL2OMrj