Johnny Sexton: I would rather beat Australia than be world player of the year 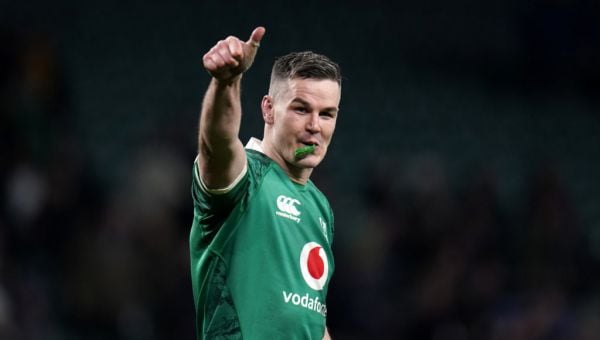 Ireland captain Johnny Sexton insists he would rather beat Australia than be crowned world player of the year.

Fly-half Sexton has declared himself fit to face the Wallabies after missing last weekend’s underwhelming 35-17 success over Fiji due to a dead leg.

The influential 37-year-old has guided his country to a Six Nations Triple Crown, a historic tour win in New Zealand, the top of the global rankings and victory over world champions South Africa this year.

He was previously named World Rugby’s player of the year in 2018 but, ahead of Saturday’s autumn finale in Dublin, said he is more interested in producing on the field than individual accolades.

“It’s always nice to be recognised like that, I’m not going to lie,” Sexton said of his nomination.

“It’s not something you go searching for but to be recognised in that area is very special.

“I would prefer a win and to play well on Saturday than win that, because ultimately at the end of the day it’s opinion.

The nominees for the 2022 World Rugby Men’s 15s Player of the Year in partnership with @Mastercard 🏆#WorldRugbyAwards pic.twitter.com/JyXDHXl2Z6

“Whereas what you produce on Saturday is what you see and it’s the only thing you can control. All my focus is on that and to be recognised is enough.”

Sexton has been shortlisted for the award alongside Ireland and Leinster team-mate Josh van der Flier, South Africa centre Lukhanyo Am and France captain Antoine Dupont.

The Leinster star suffered his injury in Ireland’s 19-16 win over the Springboks at the start of the month and revealed he initially feared being forced to sit out again this weekend.

“Last week was a bit of a struggle with swelling and fluid and stuff like that,” he said.

“It was just managing that and then making sure I get the right amount of training in this week to be able to perform but also not do too much that swells it up again. It’s good to go, feels good and I’m ready.”

Without a host of important players through injury, including their skipper, Andy Farrell’s men stuttered in an unconvincing victory over Fiji.

Sexton dismissed the notion that the much-changed starting XV was a reserve line-up and believes Ireland have not coped well enough with their current status as the world’s best team.

“And the majority of the first team were playing, that was why it was disappointing.

“There are areas of our game from the South Africa game – I’m not putting it all down to the Fiji game – that teams are going to come after us in a different way because we’re the number one team in the world or we’ve got some good results under our belt.

“They’re going to come after us and try to mess us up. Over the two games so far, we haven’t handled that as well as we would have liked.”