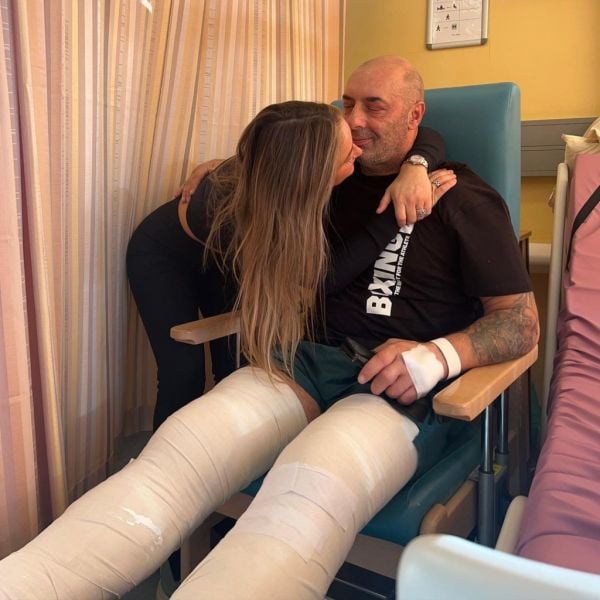 Boxing coach Pete Taylor is learning to walk again after suffering a “freak” accident while chasing a thief in Barcelona.

“Freak injury incurred chasing a thief in Barcelona,” he wrote.

He paid tribute to his partner Karen Browne: “This is my angel, she washed and cleaned my arm twice a day for 18 months now she’s wheeling me up and down in a wheelchair for the next 12 weeks and will be helping me to walk again.

“You can never doubt someone who’s in your life who is there for you all the time.”

Pete, who runs a boxing gym in Bray, Co Wicklow, is the father of Olympic gold medalist and world champion boxer Katie Taylor.

Pete was photographed with his daughter ahead of her recent bout against Argentinian boxer Karen Elizabeth Carabajal. Katie defeated Carbajal at the Wembley Arena in October.

Pete had previously coached Katie, but went their separate ways in 2016 when Pete separated from Katie’s mother Bridget.

Pete married long-term girlfriend Brown in a low-key ceremony in Majorca in June.

In his Instagram posts, uploaded on Tuesday, Pete referenced a shooting incident at his gym in Bray, where he was seriously injured and another man, Bobby Messett, was killed.

A murder trial opened at the Central Criminal Court in June 2021, with Gerard Cervi (34) from East Wall in Dublin 3, charged with the murder of Mr Messett, and the attempted murder of Pete.

Mr Cervi had pleaded not guilty to both charges.

Pete gave direct evidence during the jury trial, where he described running at a gunman before being shot.

Ms Brown also gave evidence at the trial, recalling how she thought Pete was dying when she saw him lying on the floor of the gym with blood coming from his chest.

The trial ultimately collapsed when a juror became seriously ill.