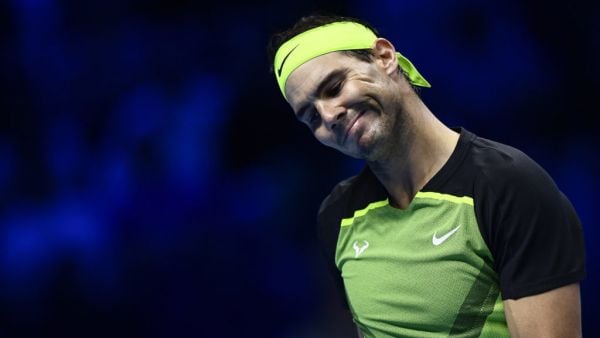 Rafael Nadal has been eliminated at the group stage of the ATP Finals in Turin and his 19-year-old compatriot Carlos Alcaraz confirmed as the youngest season-ending world number one.

Nadal’s hopes of reaching the semi-finals were all but ended with a straight-sets loss to Felix Auger-Aliassime on Tuesday, and Casper Ruud’s later win over Taylor Fritz confirmed the Spaniard’s fate.

Nadal began the week with a chance of finishing the year ranked world number one but he suffered an opening loss to Fritz before his 6-3 6-4 loss to the Canadian.

A win to remember! 👏

The moment @felixtennis recorded a first career win vs Nadal with a 6-3 6-4 victory over the Spaniard#NittoATPFinals pic.twitter.com/5xkMhEJSUc

Ruud’s 6-3 4-6 7-6 (6) win over Fritz confirmed Nadal’s fate, sending the Norwegian through as winner of the Green Group with Fritz and Auger-Aliassime to face each other for the runner-up spot.

“When you are facing all the circumstances that I faced the last six months, to be here is positive,” said Nadal, who has struggled with injury and recently became a father for the first time.

“To experience what’s going on is not a big surprise. That does not mean that I am not sad about the results. It’s something that can happen.

Carlos Alcaraz is the youngest player EVER to end the year as World No. 1! 💥 @PepperstoneFX | #ATPRankings | #partner pic.twitter.com/jIx8zjSJoI

“I just accept that tomorrow I start my 2023 season. That’s all. The only thing that I can do is keep working, keep doing the things that I need to do to give myself a chance to start with real chances in 2023.

“I don’t think I forget how to play tennis, how to be strong enough mentally. I just need to recover all these positive feelings and all this confidence and all this strong mentality that I need to be at the level that I want to be.”

There was the jarring sight of Toni Nadal, the guiding hand in his nephew’s career for so long, sitting in Auger-Aliassime’s box, with the young Canadian currently under his tutelage.

It was Nadal who threatened a break in the early stages but the 22-time grand slam champion then faltered in the eighth game, throwing in more of the errors that marred his performance against Fritz.

Auger-Aliassime, who lost to Ruud on his debut on Sunday, moved ahead again early in the second set and produced a strong serving display to boost his hopes of reaching the last four.

Having won the Australian Open and French Open in the same year for the first time, Nadal’s 2022 season is now ending with a whimper, and he must try to avoid a fifth successive loss when he takes on Ruud on Thursday.

Alcaraz is the first teenager to finish the year as world number one, and beats the record set by Lleyton Hewitt who was 20 when he achieved the feat in 2001.