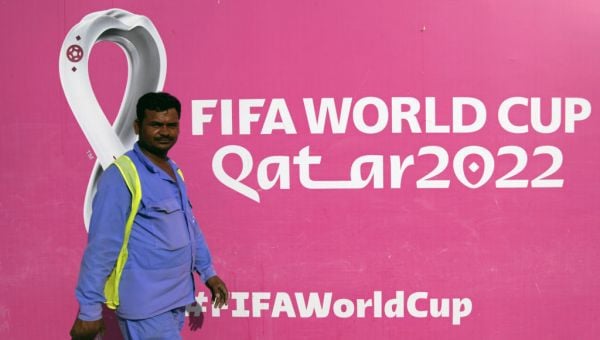 Qatari World Cup organisers have apologised to a Danish television station whose live broadcast from a street in Doha was interrupted by security staff who threatened to break a camera.

Journalists from the TV2 channel were “mistakenly interrupted” late on Tuesday evening, the Supreme Committee for Delivery and Legacy acknowledged in a statement.

“Upon inspection of the crew’s valid tournament accreditation and filming permit, an apology was made to the broadcaster by on-site security before the crew resumed their activity,” it said.

We now got an apology from Qatar International Media Office and from Qatar Supreme Commitee.
This is what happened when we were broadcasting live for @tv2nyhederne from a roundabout today in Doha. But will it happen to other media as well? #FIFAWorldCupQatar2022 pic.twitter.com/NSJj50kLql

Reporter Rasmus Tantholdt was speaking live to a news anchor in Denmark when three men drove up behind him on an electric cart and tried to block the camera lens.

“You invited the whole world to come here, why can’t we film? It’s a public place,” Tantholdt was heard saying in English.

“You can break the camera, you want to break it? You are threatening us by smashing the camera?”

The incident, five days before the global football tournament starts, revived a subject that has been sensitive for tournament organisers who have denied claims there are strict limits on where media can film in Qatar.

Event chiefs said they later spoke to Tantholdt and “issued an advisory to all entities to respect the filming permits in place for the tournament”.

Denmark’s football federation has been one of the biggest critics of Qatar among the 32 World Cup teams over the emirate’s record on human rights and treatment of the low-paid migrants who have worked on the massive construction projects since Fifa picked Qatar as host in 2010.

Danish players will wear strips with a toned down badge and manufacturers’ logo when they play France, Australia and Tunisia in Group D, as a protest in support of labour rights.

A third-choice black shirt has been included as “the colour of mourning”, for construction workers who have died in Qatar.