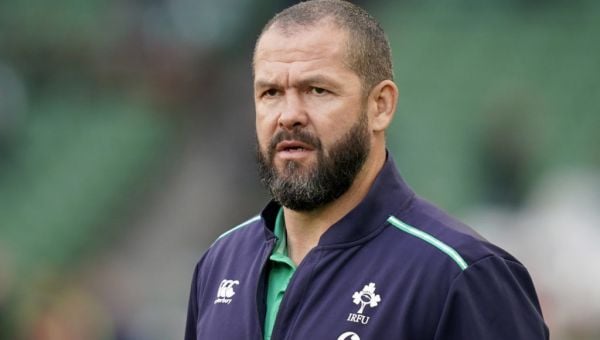 Ireland head coach Andy Farrell is braced for a backlash from a wounded Wallabies side intent on taking the scalp of the world’s top-ranked team.

Australia run out at the Aviva Stadium in Dublin on Saturday evening seeking to make amends for last weekend’s shock humiliation at the hands of Italy.

Wallabies head coach Dave Rennie has made sweeping changes to the team which started a chastening afternoon in Florence, recalling a host of regulars.

Farrell expects the alterations to create a “different vibe” and knows how dangerous the opposition can be due to their agonising one-point loss to Six Nations champions France a fortnight ago, which followed a narrow win in Scotland.

“They have a couple of things to hang their hats on in regards to motivation,” said Farrell, whose side remain atop the global rankings.

“But in reality 10 changes for them and they get the leaders back in the room, so there is a different vibe there from the start.

“Those guys are the ones that took the field against Scotland and came so close to winning in Paris. Like we’ve said all week, we know how difficult that is.

“I’m sure they will be using last week as motivation and putting that together with coming to the Aviva and taking our scalp, I’m sure that fires them up even more.”

Farrell has also made significant changes for his side’s autumn finale following a flat display in an underwhelming 35-17 win against Fiji.

Captain Johnny Sexton is among five players back following injury, with recalls for Dan Sheehan, Peter O’Mahony and Garry Ringrose taking the total number of personnel switches in his starting XV to eight.

Having begun the month by toppling world champions South Africa, Farrell hopes his team have saved the best until last as they attempt to sign off a stellar 2022 with a ninth win from 11 Tests in an 8pm kick-off under the lights of the Aviva Stadium.

“We want to win every game, that’s always important in our eyes and we never shy away from that,” he said.

“We are two games in – a decent performance and one that wasn’t – so saving our best till last. I suppose I’ll grade it (the autumn campaign) better after.”

Speaking about the late start, he added: “Five o’clock (5.30pm, against the Springboks) was pretty decent, a couple more hours on top of that, hopefully people aren’t falling to sleep by then!

“The Australians are a great team to watch, they play a great brand of rugby, and knowing what they’re going to bring to the party on Saturday night will make for a spectacle.”