Construction to begin on national velodrome centre next year 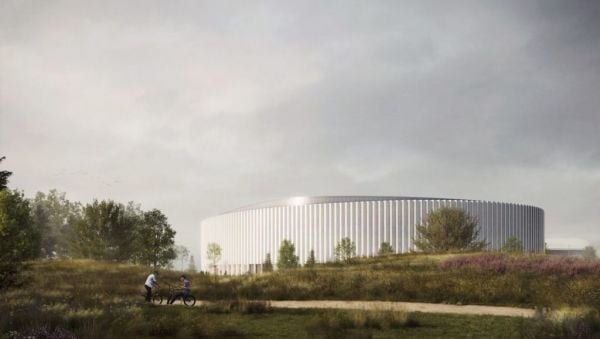 A multi-million velodrome and badminton centre will be one of the first projects to be delivered as part of the Government’s medium-term plan for Sport Ireland’s vast Dublin campus.

In a “masterplan” for the next 15 to 20 years announced on Thursday, it confirmed plans for what will be the first velodrome track in Ireland, which is already contained in the Government’s National Development Plan.

A planning application for the project was lodged with Fingal County Council by Sport Ireland in August and a decision is expected in the coming weeks.

Minister of State for Sport Jack Chambers said that “all going well” construction of the centre would begin in the third quarter of 2023, and would take about 18 months to build.

It is estimated to cost 60 million euro, with work on the design still ongoing.

A museum of sports will also form part of the campus, which Sport Ireland chief executive officer Una May said would be the “cultural hub” of the campus.

“It is potentially going to be a venue where we can host visitors, we can host receptions, we can have the full history of Irish sport and the arts are very important to us as well, and we are currently developing an artist strategy for the campus, so that will incorporate that side of culture.”

Mr Chambers said the centre “should be the home of Irish sport” where people can reflect on past sporting victories and attract generations to the campus.

The Sport Ireland campus in north Dublin already hosts multiple facilities, including an indoor athletics arena and offices for the Football Association of Ireland and the Irish Rugby Football Union.

Speaking at the launch of the plan, Taoiseach Micheál Martin said: “I think this has been one of the great assets of the country in terms of how it’s developed over the last 20 years since 2004 when it was first conceived.

“I think it means a lot to the athletes in the country.

“I think it has, without question, enhanced performance. As we’ve just seen recently, in gymnastics, just number of years ago, two years ago, when the gymnastics centre was established and (now) Rhys McClenaghan was awarded the (World) Championship medal, so these facilities to help performance.”

He added: “This master plan, the velodrome and badminton centre, proper headquarters for sports organisations, I think all of them centred here, interacting with each other, developing synergies, and of course accommodation and the whole idea of developing the village-type complex community-based approach, I think is very, very exciting.”

Sport Ireland is the authority tasked with the development of sport in Ireland.