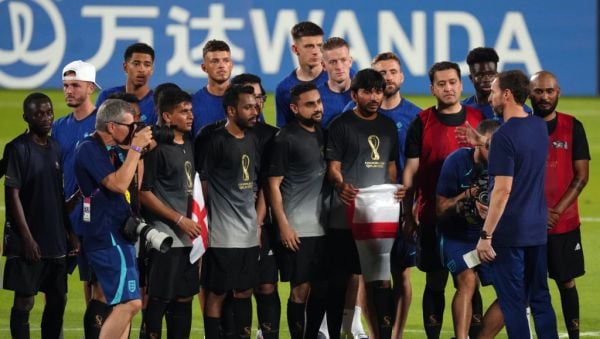 Gareth Southgate and England players met migrant workers in Qatar ahead of the World Cup kicking off in a country where thousands have reportedly died during preparations for the tournament.

Having controversially been awarded hosting rights in 2010, the Gulf state’s suitability and human rights record has been intensely scrutinised.

Last year a report by the Guardian newspaper said 6,500 migrant workers had died in Qatar since the award of the World Cup – something “categorically” denied by authorities.

The Football Association has backed Amnesty International’s call for compensation and chief executive Mark Bullingham joined Southgate and players as workers came to the training base on Thursday.

Participating World Cup nations were all given a list of potential activities as part of what FIFA calls ‘Community Engagement Events’, with the FA deciding to host a training session with migrant workers.

The United States took part in the FIFA-organised ‘Workers’ Welfare ‘Team 360’’ event on Tuesday. Holland and Argentina are due to follow suit.

Football’s world governing body said the event sees players “recognise the achievements and dedication of workers by engaging with participants from the Workers’ Cup, and leading them through drills and exercises”.

FIFA added: “Through the common language of sport, players and workers will share a rare cultural exchange.”

Gregg Berhalter and several #USMNT players showed their appreciation to @FIFAWorldCup workers for their efforts in Qatar with some fun on the field tonight at our official training site in Doha, Al Gharafa SC Stadium ⚽️
Players joined the workers in some small-sided games. pic.twitter.com/dPrRRxh0C4

The FA indicated it would have met migrant workers irrespective of this FIFA-managed event to respect their role in delivering the World Cup.

The national governing body organised for those involved to be given England shirts, which players signed at the end of the training drills.

Penalties were taken by both the players and workers, who the FA surprised by giving them category A tickets to the Three Lions’ Group B opener against Iran on Monday.

An employee of the Qatar Supreme Committee said those taking part all had contracts with them, saying those involved had played in the Workers’ Cup or are currently involved in community football.

A couple of workers spoke to the assembled media after the session, including Ashlin, 27, from Kerala, India.

“It’s a good opportunity,” he said, wearing his signed shirt and holding his match ticket along with a mini replica World Cup football.

“I am an England fan: Frank Lampard, John Terry and free-kick master in David Beckham. I’m also a Chelsea fan.”

An electrical technician who has been in Qatar for the past three-and-a-half years, Ashlin currently works at Al Bayt Stadium – the venue for England’s Group B clash with Wales.

“Qatar is a good country and it’s a safe country,” he said. “There’s freedom in Qatar.”

Asked about the living conditions, he said: “It’s good. The accommodation is good quality.

“I live near Lusail Stadium. I have three room-mates. It’s good condition.”

Later asked whether he was aware of any migrant workers who have had a bad experience in Qatar, he simply said: “It’s a good country and there’s freedom in Qatar. It’s good.”