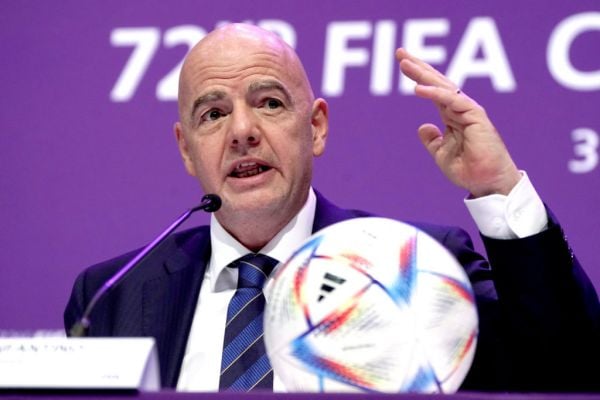 Fifa president Gianni Infantino is “deluded” to expect World Cup participants to be silent on human rights issues during the tournament in Qatar, the chief executive of Kick It Out has said.

Infantino wrote to all 32 competing nations earlier this month urging them to focus on the on-field action and “not allow football to be dragged into every ideological or political battle that exists”.

The 12-year run-in to the finals in Qatar has been beset by controversy over the country’s treatment of migrant workers and the safety of local and visiting members of the LGBTQ+ community in a country where same-sex relationships are criminalised.

Burnett, who has previously likened awarding the finals to Qatar to giving the tournament to apartheid-era South Africa, was unimpressed by Infantino’s move and believes LGBTQ+ players would be within their rights to question Fifa’s fitness to govern football.

“(The letter) is bizarre. I think it’s deluded to a large degree, because if you make a decision to hold a World Cup in a country that is not inclusive for any group of people, and then you expect people to be silent about it and just get on board, believing that football is somehow detached from broader society, it’s just ridiculous,” he said.

“If I was an LGBTQ+ player, across football, and that is what’s being said from my governing body, I’d have serious question marks about the fitness for purpose of my governing body and its ability to represent my views. So no, I don’t agree with what Fifa said at all.

“I also think it’s completely unfair that we should ask our players and our coaches and managers to answer questions based on politics and based on inclusion when actually the people we should be asking about it is Fifa, who made the decision in the first place.”

“So, please let’s now focus on the football!”—@FIFAcom

No matter what #FIFA says, no player or federation surrenders any of their basic human rights—including to free speech—by playing at the #WorldCup or going to #Qatar. https://t.co/4EjTb6TrLO pic.twitter.com/OhktjN425F

Kick It Out’s Qatar working group had hoped to ensure a safe and inclusive environment for fans from the LGBTQ+ community, but Burnett believes that has failed. Insufficient assurances over safety mean that, to his knowledge, no LGBTQ+ supporters are travelling from the UK to Qatar for the tournament.

Fifa is understood to be confident that all necessary measures will be in place for LGBTQ+ fans and allies to enjoy the tournament in a welcoming and safe environment, just as for everyone else.

The Qatar working group’s second objective is to leave a positive legacy for the LGBTQ+ community within Qatar and ensure their stories are heard, while the third is to ensure human rights criteria are properly applied in future bidding processes.

Saudi Arabia, a country with an appalling human rights record, is reported to be part of a bid to co-host the 2030 World Cup finals.

Asked how much confidence he had that Fifa would apply its human rights framework to reject such a bid, Burnett said: “At this point, none.”

He told SportsPro: “Until we see how the future decisions are made, it’s just a paper exercise to us. All we’re living with now is the impact of previous decisions.

“What will decide whether anything has changed is future decisions. We have no confidence at the minute in the prospect of anything better going forward.”

Burnett said Kick It Out had spoken to Fifa last year regarding the human rights framework the game’s global governing body had drawn up but had received no guarantees that a future tournament would not be awarded to Qatar, or a country with a similar record.

He said it was Kick It Out’s strong belief that adherence to international human rights standards had to be a prerequisite to bidding, rather than something which a bidder could commit to improving post-award.