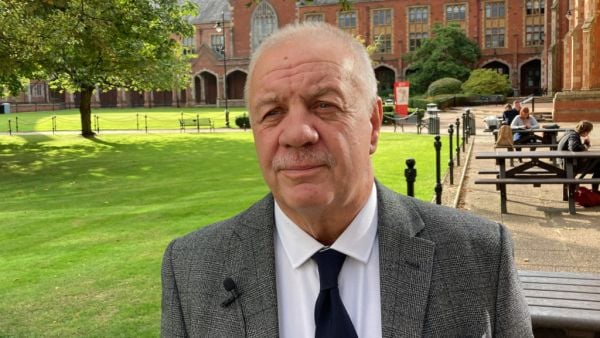 Northern Ireland Secretary Chris Heaton-Harris has described a film about the experience of Troubles victims as “powerful”.

Mr Heaton-Harris was also pressed on his government’s controversial proposed legislation to deal with the legacy of Northern Ireland’s troubled past by victims campaigner Raymond McCord after viewing The Victims’ Stories.

The film, which tells the stories of eight victims, has already been shown to parliamentarians at Westminster as well as members of the Oireachtas.

Mr McCord, whose son Raymond Jnr was killed by loyalists during the Troubles, met with Mr Heaton-Harris in Belfast on Tuesday where they watched the film.

Mr McCord described Mr Heaton-Harris as “friendly” but claimed he sought to justify the legacy bill.

The Legacy Bill, which is going through its parliamentary stages, would see a form of immunity offered to those suspected of killings during the conflict if they agree to co-operate with a new truth recovery body.

It would also prohibit future civil cases and inquests related to Troubles crimes.

It has been almost universally opposed by parties across the political divide as well as all victims groups.

Last week Mr Heaton-Harris told the House of Commons that he would make changes to the Bill but did not specify what the changes would be.

“His focus was on the murderers telling their version of the truth of how they murdered innocent men, women and children, then given an amnesty.

“Despite ourselves raising all the proposals the Secretary of State was lost for words in trying to defend the Bill. He failed to tell us of any victim who agrees with it. As none do.

“We now have a British government who puts the testimonies of murderers before the victims.

“Mr Heaton-Harris could not or would not answer if after watching the film did he now believe the bill would help victims move on.”

A Northern Ireland Office spokesperson said: “The Secretary of State was grateful for the opportunity to watch The Victims’ Stories film, which is a powerful example of why we must deliver better outcomes for all those directly affected by the Troubles.

“The Secretary of State remains fully committed to listening to the views of victims and survivors, and to carefully consider how their concerns can be addressed as the Legacy Bill continues its passage through Parliament.”