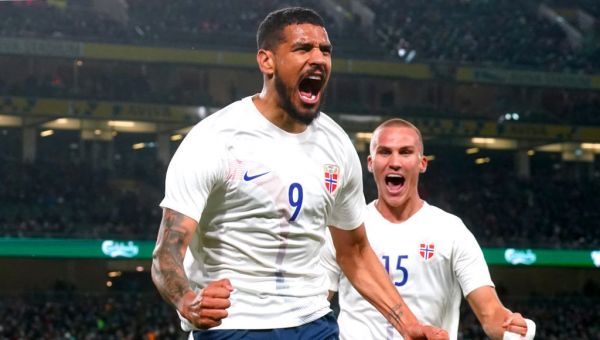 Substitute Ohi Omoijuanfo made light of Erling Haaland’s absence as Norway struck late to beat the Republic of Ireland 2-1 in Dublin.

Omoijuanfo snatched the visitors victory with his first senior international goal at the Aviva Stadium after Alan Browne had cancelled out Leo Ostigard’s opener.

It was a kick in the teeth for Stephen Kenny’s men, who had rallied after a pedestrian first half to look the team more likely to win the game after the break.

They will head for Malta on Sunday knowing there are issues to address before they open their Euro 2024 campaign in March with a daunting fixture against France.

Norway enjoyed the better of the early exchanges with Arsenal’s Martin Odegaard pulling the strings impressively.

But manager Stale Solbakken will have been disappointed with the way they wilted in the face of the Irish riposte before Omoijuanfo’s late intervention, with testing trips to Spain and Georgia awaiting them next year.

With Cardiff’s Callum O’Dowda lining up in an unaccustomed left wing-back role, Ireland started confidently to push Norway back into their own half, and Callum Robinson fired wide from distance with less than three minutes played.

The visitors responded with Mohamed Elyounoussi causing problems, and the Southampton midfielder blazed a sixth-minute attempt high over.

Skipper John Egan had to be at his best to block Elyounoussi’s 22nd-minute shot after the wide man had been played in behind Nathan Collins and Patrick Berg blazed over from Odegaard’s cross at the resulting corner.

Jorgen Strand Larsen fired wastefully over and goalkeeper Gavin Bazunu was troubled by Odegaard’s speculative free-kick with the Republic rather losing their way.

The home side enjoyed a let-off when Elyounoussi slipped before he could shoot after carving his way into the penalty area 12 minutes before the break, but they were not so fortunate with five minutes of the half remaining.

Ostigard timed his run to perfection to get in front of Egan and head Odegaard’s corner past Bazunu to give Norway a deserved lead.

Ireland returned with much greater purpose and might have been level within five minutes.

O’Dowda and Robinson combined down the left for the striker to lift a cross into the middle where Browne just failed to get to it and the unsuspecting Egan bundled the ball just wide as he tried to react.

Morten Thorsby was relieved to see his attempted clearance trickle past a post rather than inside it after Michael Obafemi had made his presence felt, and keeper Orjan Nyland denied Browne at point-blank range.

Bazunu kept Kenny’s men in the game with a 58th-minute save from Ola Solbakken after he had exchanged passes with Thorsby, but the general trend was very much in the other direction.

O’Dowda failed to make the most of a headed opportunity at the far post, but it was from his 69th-minute cross that his side forced their way back into it.

Ostigard could only head the ball to Browne on the edge of the box and he sent a skidding shot inside the post despite Nyland’s best efforts.

However, there was to be a late twist when, after Collins failed to deal with an 85th-minute Odegaard free-kick, substitute Omoijuanfo stabbed home to win it.