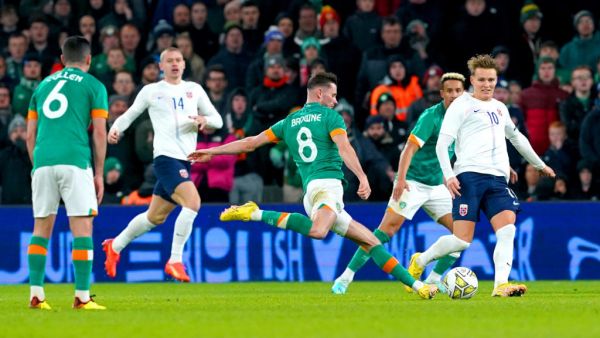 Alan Browne has warned the Republic of Ireland they need to remember how not to lose if they are to prosper in their Euro 2024 qualifying group.

Ireland suffered a 2-1 home defeat by Norway on Thursday evening after recovering from a poor start but ultimately ending up on the wrong end of the scoreline.

They have now lost three of their last six games, and with only Sunday’s friendly in Malta to go before they launch a difficult campaign against the might of France in March, Browne admits there is work to be done.

Asked if Stephen Kenny’s men needed to learn how not to lose, he said: “Definitely, we said that after the game.

“Whatever about the first set-piece, the second one is fortunate from their point of view. But we were on top, it’s about not losing the game.

Ireland produced a poor first-half performance and deservedly trailed at the break after Leo Ostigard got to Martin Odegaard’s corner ahead of John Egan and headed the visitors in front.

But the home side responded after the break and got their reward when Preston midfielder Browne smashed home an equaliser from distance.

Norway receded as the Republic surged forward in the search for a winner, but ultimately it was Stale Solbakken’s men who emerged victorious when Omoijuanfo stabbed home after Nathan Collins had failed to clear Odegaard’s free-kick.

Browne said: “It’s always difficult when a team sits in, and they’re compact. Their game plan was to nullify, and they did it quite well because we couldn’t break them down.

“We came out second half and changed a few things, made a few tweaks, but I think we were the better team for large portions of the second half, and it’s another set-piece, which is disappointing from our point of view, that cost us.

“It’s a header and it’s a bit unfortunate, but overall I don’t think we were good enough to win the game.”

O’Shea said: “It’s ultimately disappointing coming away from that game to have lost it. I don’t think it’s a reflection of the game itself, but we conceded from two set-pieces and we got punished.

“We have to look back at it and maybe just be a bit more streetwise and manage the game a bit better, maybe not give away fouls in those areas and stuff like that.

“It’s not any one person making a mistake, it’s a collective, and we’ve all got to look at it that way.”