Ambassador: Ukrainians will still flee to Ireland despite accommodation crisis 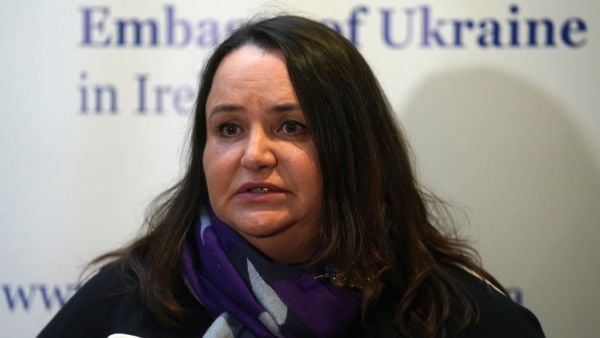 The Ukrainian ambassador to Ireland has said Ukrainians will continue to seek refuge in Ireland despite a shortage of suitable accommodation.

Speaking to the media after Ukrainian President Volodymyr Zelensky addressed students at Dublin City University (DCU), Larysa Gerasko said that because of the widespread destruction of infrastructure across the country, people would continue to flee to countries like Ireland.

She said they are coming in smaller numbers than before, but added that “winter is coming” and she expected more people to arrive in Ireland as the winter goes on.

“As you know, 40 per cent of our electricity infrastructure was destroyed. So people, especially women with children, try to find a safe place because it’s really a matter of survival now in Ukraine.

“It is very difficult to (provide) heat (for) babies, for instance, without electricity and to leave the children in the cold.”

Ms Gerasko said she is in contact with the Department of Children to try to ensure that all necessary measures are taken to welcome and to provide accommodation for arriving Ukrainians.

“Our embassy and the Irish embassy in Ukraine, we started (an) information campaign in Ukrainian mass media and of course on social media.

“So we are informing our Ukrainians about all conditions and situations with the accommodation.

“We cannot guarantee that all Ukrainians read mass media because many of them, they don’t have electricity or Internet.”

She said this was especially the case for people fleeing the country from occupied territories.

Ms Gerasko said: “But we are doing all our best in order to inform our Ukrainians what to expect.

“Ukrainians, most of them prefer to stay.”

She said Ireland is not the only country experiencing difficulties with accommodation, and that the problem was common across Europe.

More than 62,000 Ukrainian nationals have fled to Ireland since Russia invaded Ukraine in February, of which 46,000 are being housed by the State and by citizens.

Last month, the Government warned of a severe shortage of emergency accommodation, and that Ukrainians should consider staying in other EU countries as State-provided accommodation was not guaranteed.

Since then, the Government has restricted the conditions under which refugees from Ukraine can receive accommodation, including a refusals policy where a second offer of accommodation cannot be given if the first is refused.

The Government is also doubling the payments for people hosting Ukrainian refugees to €800 a month, and work is ongoing to renovate public buildings as emergency accommodation for any newly arriving Ukrainians.