ON Saturday, Clonmore return to Netwatch Cullen Park, for the third time in this year’s Leinster Junior Club Championship where a place in a provincial decider is on the line. At the start of the year, they set out to win a county title and once that was achieved anything they did in Leinster was initially a bonus. Now that idea has been shelved and captain, Shane McGrath, says these players yearn for a crack at a Leinster title. 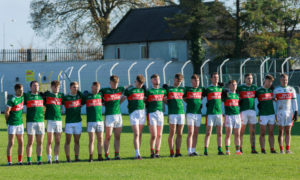 The Clonmore team line up for the National Anthem ahead of their Leinster JFC quarter-final match against Straffan in Netwatch Cullen Park
Photo: michaelorourkephotography.ie

“After getting this far, the goal is now to win it. There is no point in getting to a semi-final. We know we have the potential to win it and you would be kicking yourself if we don’t play as well as we can.”

He says the people of Clonmore are hoping the dream can continue.

“The whole parish is buzzing. Everyone is talking about it. You can even see it with the underage in the club. Everyone is loving it. Hopefully we can push on and get to the final.”

The Clonmore man was at the St Mullins game on Sunday and took motivation from it.

“Two Carlow teams in the last four of their respective finals should spur everyone on,” said McGrath.

Manager, Ciaran Walsh, takes a similar approach to his captain.

“They want to see how far they can go. They want to get to the bottom of themselves. That has been the target for every game. Look, when you get to a semi-final you are in with a chance of winning Leinster but we are only taking it one game at a time.”

He openly admits he has done a little homework on the opposition.

“We would have seen their county final against Dunsany (1-11 to 0-10). It was a very close and competitive game. I would have spoken to a few people from Wicklow as they played Laragh in their last game. We know a little bit about them.”

Walsh has injury concerns but he feels the panel is big and strong enough to absorb any forced changes.

“Enda McGrath and Billy Lawlor are struggling but you have seen we have been using the panel. The last day lads came off the bench and made an impact.”