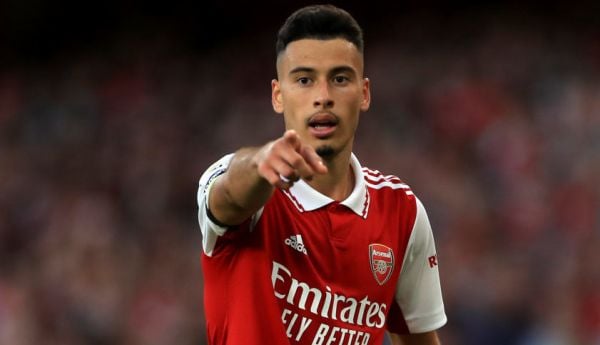 Gabriel Martinelli has watched previous World Cups surrounded by a festival atmosphere and extended family – this year however he is aiming to be the cause of their celebrations.

The 21-year-old Arsenal forward was a surprise selection in the Brazil squad for the 2022 finals, even if he is enjoying a fine season for the Gunners.

His five goals and two assists have helped Arsenal to lead the Premier League by five points heading into the break for the World Cup.

But instead of training with his club-mates he is in Qatar to try and help Brazil win the tournament for a record sixth time.

“When I was watching the World Cup, I was dreaming about it,” he said.

“When the flag is painted on the front of your house, when you have 15 family members in your backyard, the TV is rolled out, there are balloons, fireworks, honking horns, your cousins are running up the stairs and your uncle is at the barbecue … how can you not?

“You are watching the Selecao, and you’re thinking; imagine wearing that shirt at a World Cup.”

Even receiving his first call-up earlier this year surprised Martinelli, but such is his journey from the lower tiers of Brazilian football to becoming an integral part of the Premier League’s in-form team that a place at the World Cup soon followed.

“When Tite called me up to the senior squad for the first time back in March, I didn’t know what to say,” Martinelli told the Players’ Tribune.

As a little boy, @gabimartinelli grew up watching Brazil and imagined playing in the World Cup.

Now, his dreams of wearing the yellow shirt are coming true.https://t.co/uU92VtZjcW

“He sent me a text and I swear, I must have read over my reply 20 times. I was terrified of writing something wrong.

“My debut in yellow was at the Maracana of all places. Surreal.

“I remember going into the dressing room and seeing the yellow shirt – MARTINELLI.

“I sent a picture to my parents. My dad wrote back, “Great, kid.”

“When I got called up to the World Cup squad last week, I got that magic feeling all over again.

“When my family gathers in the backyard for this one, I’ll be on the TV screen, and we’ll bring home the sixth (World Cup), God willing.”