LAST week, the Leinster rugby team trained at Blackgates the home ground of Tullow Rugby Club. It was a special occasion. One that the hundreds of children will never forgot and no doubt, the adults thoroughly enjoyed rubbing shoulders with some of the iconic names of Irish rugby. Players such as James Lowe, Rhys Ruddock, David Kearney, Ross Moloney, Ross Byrne, Jordan Larmour and Ronan Kelliher.  All capped for Ireland and here were these iconic names training on the fabulous new all-weather pitch.

Afterwards Leo Cullen, the Leinster head coach, led his player throughs the large crowd where all requests for  photos, selfies, autographs and jersey signings were granted. It was a hugely uplifting few hours. 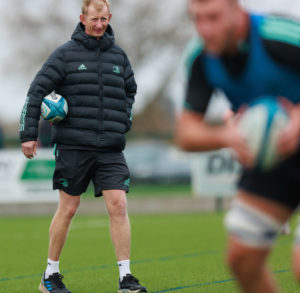 Steven Smith  was one of seven Tullow players who were also asked to take part in the training session. Jack Johnson, Jack Hanlon, Gareth Fitzgerald, Fiach Kavanagh, Jamie Cooper and Christian Vainerere from the Tullow club also togged out and took a full part in proceedings.

“It was a great experience. It was very quick and I learned a lot,” said Smith who explained how they ended up on the same field as players who he would have considered to be rugby heroes. 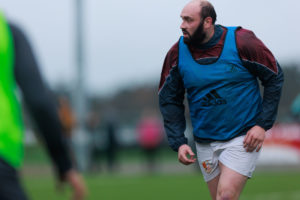 “They were down a few players who were in Irish camp. They needed a few people to fill in and Sean (O’Brien) picked us. It was always going to be a good experience. There were Irish players out there. Lions players. It was great to get involved with them. Unbelievable. It will probably never happen for us again,” said Smith, who marvelled at the speed and strength of the Leinster squad.

“You have to get on with it. The pace is unbelievable. The standard. The power and pace that they play it. How quickly they get set up. It was shoulder on stuff. Thankfully, they were not hitting us.”

Christian Vainerere is a New Zealander who played rugby in Perth in Australia for a number of years but has is in Tullow this year.

“I met a guy who came over from Dublin to Perth. After the season, he asked me did I want to come over to Ireland because he knew someone in Tullow. He passed on my details to Maurice Logue (Tullow rugby coach) and he got in touch with me.”

Vainerere is loving every minute of his time in Tullow. Too much he hints.

“It is different due to the weather, due to the style they play. It is a whole new experience. I love it. I think I am loving it too much. I came over here to play but at the moment, I am having too much fun,” he enthuses

As for the main business of the day, Leinster connections were delighted with the visit to Slaneyside. 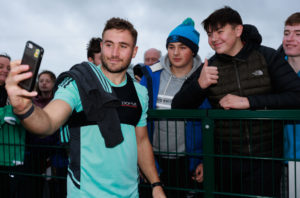 Fans get a ‘selfie’ with Jordan Larmour. Photo: michaelorourkephotography.ie

“It was great for us to get out. We have had great support from people in Tullow over the years so it is nice for us to be able to return the compliment and make the trip down here,” said Leo Cullen.

“For Sean O’Brien in particular, he has been an immense character as a Leinster rugby player. Now, he has turned the other side into coaching. He has made the move and we are very lucky to have him. 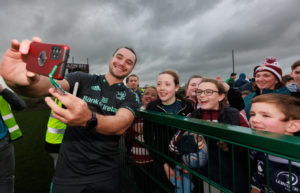 “These are amazing facilities down here. The pitch is unbelievable. The gym facilities are good. To see the young faces there. All smiles. It is a great day for Tullow. It was a huge effort by everyone in the club to get facilities to this standard,” continued Cullen.

The former Irish international player conceded that they wouldn’t always invite local rugby players to join a training session when they go outside Dublin.

“It was a little unusual. There were a number of (Leinster) players who wanted to play club rugby this weekend. We wanted to get the balance and Sean had talked about getting a number of lads from Tullow. I thought the lads acquitted themselves well,” acknowledged the Leinster coach.

Sean O’Brien himself was delighted that it all worked out so well.

“It has been brilliant. A great crowd here. Great excitement. Great to see so many young boys and girls here enjoying themselves,” the Tullow Tank acknowledged. 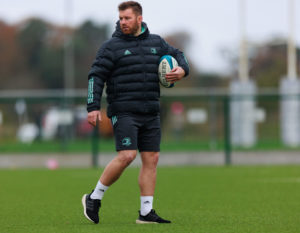 “The players went through a tough session out there. The lads are hugely impressed with the facilities. It is great to be able to host a team like Leinster.”

Sean also confirmed he has settled in after making the move from player to coach.

O’Brien says the young Tullow players who joined the training session  have benefitted from their day.

“It is good for them. They are our game managers as such. There are a few other lads who could have trained but they picked up a few knocks last week. It is a great experience for them to understand what we are trying to do, how the game is played at that level and how fast it is. Great day for them and hopefully they enjoyed it.” 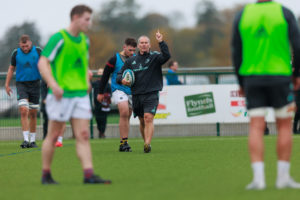 Pat Byrne, the Tullow Rugby President enthused about the occasion.

“Absolutely fantastic. A super day for the club to showcase its facilities here. Fantastic to see so many household and familiar names down here today despite the fact that so many guys are in international camp this week. It is super for the kids. Kids out here today took the opportunity to meet the players and they have really enjoyed it.

“We are delighted to be able to host it and a huge thanks to Sean O’Brien who was fundamental in organising the day.”

The Tullow President was delighted members of his own club took to the pitch too.

“It was fantastic for Tullow rugby players to train alongside the Leinster team and fantastic that Leinster were able to integrate them in and make them part of the session. A huge thanks to the coaching staff and thanks to the guys as well,” Byrne said. 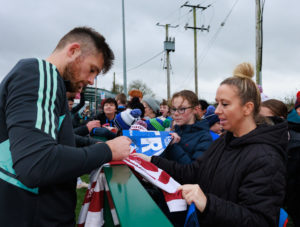