Life under constant bombing in Aleppo was ‘no longer living’ – activist 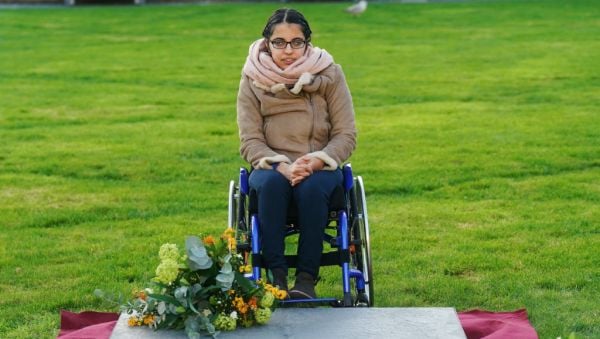 A Syrian activist has spoken about the pain of living under bombing and shelling at an event in Dublin to honour the victims of armed conflict.

Nujeen Mustafa, a disability and human rights activist who fled the bombing of Aleppo, addressed a crowd gathered for a ceremony in Dublin Castle’s gardens.

The event was held at the Memorial to the Unknown Civilian, where wreaths were laid in honour of citizens killed in indiscriminate bombings as well as causalities injured in such attacks.

It was held to coincide with almost 80 countries adopting an Irish-led declaration on the use of explosive weapons in populated areas.

Ms Mustafa, who learned English from watching television, said she would not forget the bombing of her home.

“Living under bombing and shelling is something I wouldn’t wish on anyone.

“As the sound of bombing grew louder and louder, I raised the volume on the television higher and higher.

“Living in an upper floor without a lift prevented me from reaching a safe place in my region,” said Ms Mustafa, who is a wheelchair user.

“This was no longer living, but only surviving.

“I was forced to make the journey across the Mediterranean Sea on a boat, in my wheelchair as well. This is just one story about a life under bombing and shelling.”

She said that speaking at the event was “quite painful” for her.

“Not long ago, I could have been one of them, and many of our friends and family are among them.

“This monument must wake us up. It’s no longer acceptable that so many civilians lose their lives to armed conflict.”

Ireland’s ambassador to the UN in Geneva, Eamonn Mac Aodha, and the general director of Humanity and Inclusion, Manuel Patrouillard, also addressed the crowd.

Parliamentarians from different countries, foreign dignitaries and members of civil society organisations who attended the ceremony held a minute’s silence to pay tribute to those killed and injured in armed conflicts.

White roses were laid on the monument at the end of the event.