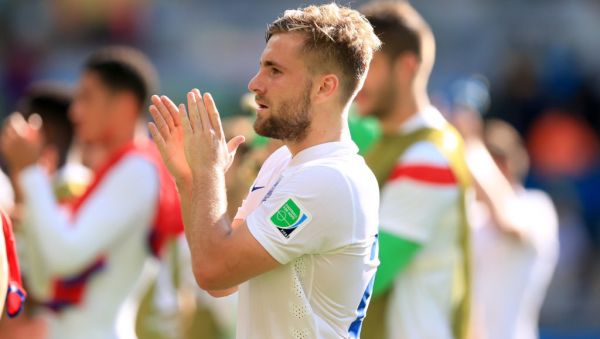 Luke Shaw hopes his experience can benefit Gareth Southgate’s youthful England side as the left-back returns to the World Cup eight years on from being the youngest player at the tournament in Brazil.

Having burst onto the scene with Southampton, eyebrows were raised when England boss Roy Hodgson selected the precocious 18-year-old left-back ahead of the experienced Ashley Cole.

It was a wretched World Cup for England as they bowed out in the group stage, but Shaw will never forget the experience and starting against Costa Rica in the final pool match in Belo Horizonte.

“I don’t think I was long off making my debut for England and Southampton at the time.

“Of course, I knew I wasn’t going to play, but it was a massive experience for me to be around that squad and get a good taste of what an actual World Cup was like… it was unbelievable.”

Just a week after featuring against Costa Rica, Manchester United made Shaw the most expensive teenager in history when signing him from Saints for £27 million plus add-ons.

The left-back has had his ups and downs since moving to Old Trafford in 2014, meaning he spent a period out of the international set-up and watched the 2018 World Cup from afar.

But an upturn in fortunes allowed Shaw to shine in last summer’s run to the Euro 2020 final, where he became just the third Englishman in history to score in a major final.

That clash with Italy ended in shoot-out heartbreak, but the 27-year-old is excited at this chance to help England make amends in Qatar at his second World Cup.

“It is strange to feel like one of the older because growing up I always felt like I was one of the younger ones in the camp,” Shaw told ‘The Lions’ Den’ on England’s YouTube channel.

Tune in as we catch up with the #ThreeLions defender on #LionsDen with @marksandspencer:https://t.co/6xElagrLPr

“I still feel young which is good, and I still am quite young, but everyone is so young. But the experience we have got is vital.

“It’s nice and if I can give that experience to the young ones and the new ones, then of course I’ll help them in any way.

“It’s under different circumstances this time because it’s in a different period and we’ve not had that normal build-up where you have a lot of games and you train for a while.

“The tension is there and it’s building and building. This time, you don’t really think too much of it, we just come out here now and we have three days until the game.

“It could be a better thing for us that we haven’t had too long to wait, games come thick and fast, and we can’t wait to get going.”