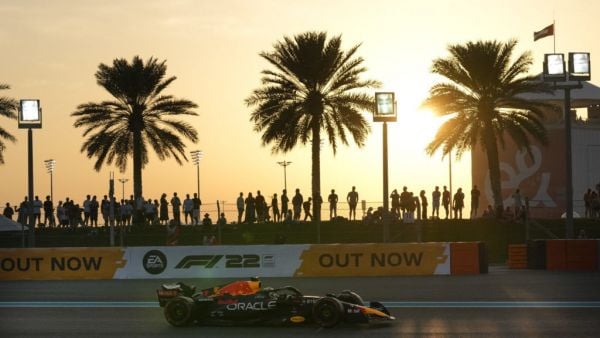 Max Verstappen returned to the track on which he won his controversial world championship last year by setting the fastest time in practice for Sunday’s Abu Dhabi Grand Prix.

A year on from taking the maiden title, which denied Lewis Hamilton a record eighth crown, the Dutch driver set the pace under the lights of the Yas Marina Circuit.

The Red Bull driver, who has won 14 of the 21 races staged so far on his unstoppable gallop to championship number two, finished ahead of George Russell, with Ferrari’s Charles Leclerc third. Hamilton finished fourth.

Seven-time world champion Hamilton was top of the time sheets in the opening running on Friday, but he ended the day six tenths adrift of Verstappen’s Red Bull.

Hamilton, who has tried to erase the memory of his championship defeat here last year, is facing the prospect of ending a season without recording a victory for the first time in his career.

And his deficit to Verstappen, at a track which is predicted to suit the Dutchman’s Red Bull machinery, suggests Hamilton’s unique record will come to an end here on Sunday night.

Friday in Yas Marina. ✅ In the mix – we’ll be working hard tonight to find those extra few tenths. 💪 pic.twitter.com/4NMHAyAGHV

Verstappen collided with Hamilton last weekend in Interlagos and then courted criticism for disobeying a Red Bull directive to trade positions with team-mate Sergio Perez in the Mexican’s quest to finish runner-up in the championship standings.

But Verstappen was at his all-conquering best in second practice to finish 0.341 seconds clear of Russell – the British driver who took advantage of Verstappen’s off-colour weekend in Interlagos to record his first Formula One victory in emphatic style.

Perez, who enters the final round in Abu Dhabi level on points with Leclerc, finished fifth, one spot above Carlos Sainz.

Sebastian Vettel will take part in his 299th and final grand prix on Sunday ahead of his retirement from the sport. The four-time world champion was 12th in his Aston Martin.

Daniel Ricciardo, who also will not be on the grid in 2023 after he was dumped by McLaren, took ninth, two places ahead of his team-mate Lando Norris.