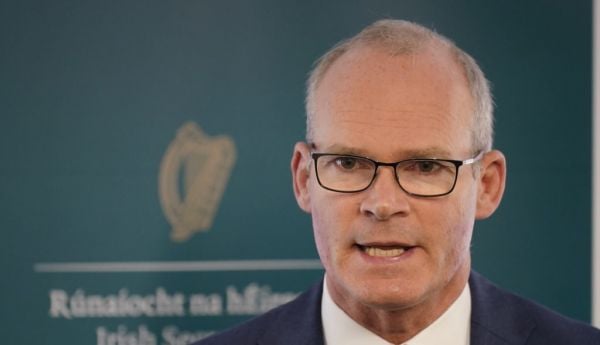 Russian sanctions on 52 Irish politicians and officials are a “very unwelcome distraction” and an effort to unsettle Ireland and its political system, the Minister for Foreign Affairs has said.

Speaking on RTÉ’s Morning Ireland, Simon Coveney said Ireland should not play this game and should focus attention on holding Russia to account for its actions in Ukraine.

On Wednesday Russia’s foreign ministry said that it had put Irish politicians and officials on a “stop list”, barring their entry to the country. The list includes Mr Coveney and Taoiseach Micheál Martin, Tánaiste Leo Varadkar, Minister for Finance Paschal Donohoe and Minister for Justice Helen McEntee.

Minister for European Affairs Thomas Byrne is also among the politicians on the list while Fianna Fáil TD Seán Haughey and Senator Timmy Dooley both confirmed they have been informed of their inclusion, according to The Irish Times.

Mr Coveney said he did not want to comment on which individuals were included on the sanctions list.

“We have informed each of the individuals who are on the list so that they know themselves and that is as much as we are going to do,” he said.

“I think this is an effort by Russia to unsettle Ireland and our political system and I don’t think we should play that game. We should focus on where the real war is, which is in Ukraine, where Russia is responsible for war crimes.

“Ireland’s role, in terms of trying to hold Russia to account for what they are doing, is where we have been very effective and that is where we should continue to focus our attention.”

Mr Coveney said none of the 52 people now subject to a travel ban to Russia had any intention of visiting the country anytime soon.

“Today our focus is hosting nearly 300 people in Dublin from all over the world and having over 80 countries signing up to an Irish-led declaration in relation to limiting the use of explosive weapons in populated areas to protect civilians. This is what Ireland is doing.”

He said the travel ban primarily impacts politicians in Fianna Fáil and Fine Gael, with some Independents also featured.

“It doesn’t cover all political parties. But look, I don’t want to insinuate anything from who is not on the list and who is on the list. This is a decision by Moscow to target Ireland and it is not our job to publicise that.”

Mr Coveney said Ireland cannot take a stance of neutrality at a time when a military superpower seeks to change international borders by force.

“Imposing their will through brutality – which we are currently seeing in Ukraine – Ireland is not neutral on that issue and hasn’t been since the outset. If one country is blatantly breaching international law and another country is the victim of that, well Ireland takes sides. And we shouldn’t apologise for taking sides.

“We are not members of Nato but we are a country that chooses between right and wrong and we are doing so in this instance. And so we should.

“What we have today is a country that has decided to target Ireland this week with specific sanctions in an effort to create political division in Ireland so we are less focused on holding Russia to account. We shouldn’t be playing that game.”