‘Take care of your freedom’, Zelenskiy says in address to Irish students 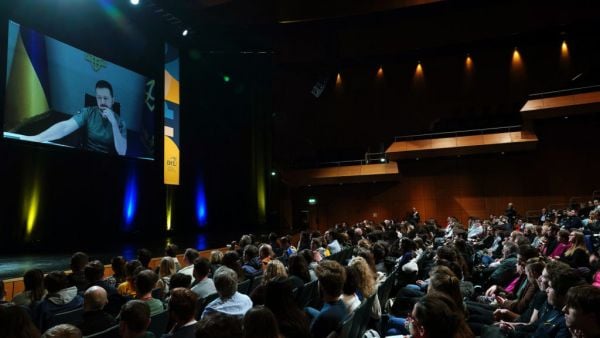 Volodymyr Zelenskiy has addressed students at The Helix in Dublin City University (DCU), advising them to “take care of your freedom”.

The Ukrainian president said the list of sanctions against 52 Irish politicians “don’t really affect anything, it’s more of a propaganda thing”.

He also said that he was grateful to Ireland for its “incredible warmth” in taking in 63,000 Ukrainian refugees since the invasion began, with many young students attending schools and universities.

He said: “I can tell you, select any time, and you know that you and your government and your society have helped Ukraine in many ways. And as you mentioned that no matter your neutral status, you’re absolutely not neutral in your attitude, in your assistance.

“Take care of your freedom. And glory to Ukraine.”

Hundreds of students gathered in The Helix, with several asking questions of the president, including how he handles the pressure of leading a country under attack.

When asked if he found that social media was a new battlefield of war, Mr Zelenskiy said “absolutely”.

He added: “A battlefield that’s full of capabilities and unfortunately, Russia has been using that.

“For the truths to be spread, it’s very difficult. It’s hard to overcome the false information… and it’s a component of this information war.

“We were powerful in the beginning of the war, we realised that we cannot (fight) Russia only with weapons on the battlefield because they have more of those weapons.

“This is not over yet, but still we’re hoping (Russian President Vladimir) Putin can hear us and that the information that we have is becoming a weapon and becoming a powerful weapon.”

When asked how he deals with the pressure of leading a country fighting off an invasion, Mr Zelenskiy said “perfectly normal, it’s not pressure for me”.

“I’m a calm person… Well, not every day, surely. My team knows because there are different days, different moments. That’s frankly speaking.”

He said that as a country and as a people, they had survived “many challenges” in their history.

Preparation for the event has been in the works since the summer, when the Ukrainian Ambassador to Ireland Larysa Gerasko suggested it to the Government.

Addressing the conference, Ms Gerasko said that Russia was attempting “to punish those who openly defend international law, rule of law and democracy, and support Ukraine”.

She added: “As our president mentioned, the recent decision to ban the 52 Irish politicians from entering Russia is yet another demonstration of such blatant conduct.”

Minister for Higher Education Simon Harris said it was a momentous occasion and an “important and historic day”.

“When history is written, let it be clear, we stood up, and we spoke out, and we supported Ukraine.”