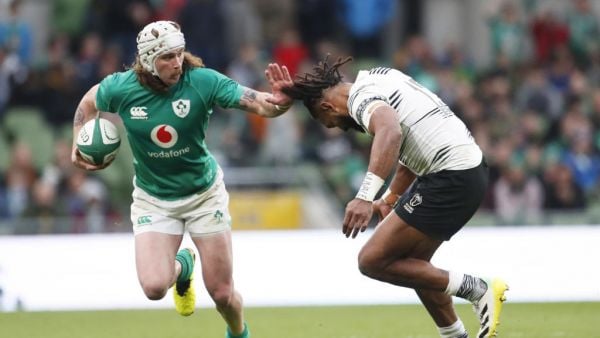 Ireland complete their autumn appointments with a Dublin clash against an Australia side reeling from a first defeat to Italy.

Andy Farrell’s in-form hosts will bid to cement their place as the world’s top-ranked side following victories over South Africa and Fiji.

Here, the PA news agency picks out some of the main talking points ahead of Saturday’s match.

Signing off a stellar year in style

The nominees for the 2022 World Rugby Men’s 15s Player of the Year in partnership with @Mastercard 🏆#WorldRugbyAwards pic.twitter.com/JyXDHXl2Z6

Ireland’s impressive progress this year was underlined on Monday by a raft of nominations for the World Rugby awards.

Farrell is up for coach of the year, captain Johnny Sexton and flanker Josh van der Flier are in contention for player of the year, while Mack Hansen and Dan Sheehan have been shortlisted for the breakthrough star accolade.

Ireland started 2022 with a Six Nations Triple Crown, rose to the top of the global rankings after registering a historic series success in New Zealand before toppling the world champions. They have won eight of 10 Tests this year and will be eager to sign off in style.

🙌 How good were those scenes in Florence 🇮🇹

Australia will run out at the Aviva Stadium seeking to restore some pride following a humiliating and historic defeat to Italy.

The Wallabies have lost 11 of their last 15 Tests, with the nadir undoubtedly coming last weekend when a much-changed line-up suffered a shock embarrassment at Stadio Artemio Franchi. Head coach Dave Rennie insisted he had no regrets over his selection but has recalled his big hitters for the Wallabies’ first Dublin visit since a 27–24 loss in 2016.

The two-time world champions relish underdog status and will be desperate to make amends by taking the scalp of rugby’s top-ranked side.

Bringing back the big guns

Ireland’s performance in seeing off ill-disciplined Fiji left a lot to be desired. They were error-strewn, disjointed and, in the words of Farrell, pretty underwhelming.

Although that performance slipped well below recent standards, it came in the absence of a host of influential performers.

Sexton, who on Wednesday suggested he is contemplating prolonging his career beyond next year’s World Cup, Van der Flier, vice-captain James Ryan, prop Andrew Porter and full-back Hugo Keenan are each back from injury.

Their availability, in addition to recalls for Sheehan, Peter O’Mahony and Garry Ringrose, is a major boost and leaves no room for excuses.

☘️ Mack Hansen’s going to have to start paying rent in that corner soon🏉#AutumnNationsSeries @IrishRugby pic.twitter.com/AjlPFunHkD

Hansen has enjoyed a whirlwind year which began with an Ireland debut in the Six Nations opener against Wales and will climax with a meeting with his native country.

The Canberra-born winger described his decision to switch international allegiance as the best of his life.

Hansen, whose mother hails from Cork, is still learning the words to the Irish anthem but has no concerns about receiving on-field stick from his countrymen on what will be an unforgettable day from a personal perspective. “They can’t sledge for s***,” he said. “Whitey (Nic White) will be chirpy like always, but the rest of them aren’t very witty or smart!”.

Another role for versatile Jimmy O’Brien

Leinster back Jimmy O’Brien entered November hoping for a Test debut. He is set to finish the month having played in each of his country’s three matches, in three different positions.

The 25-year-old was thrust into the Springboks clash as a makeshift replacement in midfield due to an injury before starting at full-back against the Fijians.

This week, he has been shifted to the left wing. Farrell has not been surprised by O’Brien’s impact and is a big fan as he searches for greater squad depth going into next year’s Six Nations and the World Cup. “He has all the hallmarks of a great, composed international player,” the coach said of O’Brien.