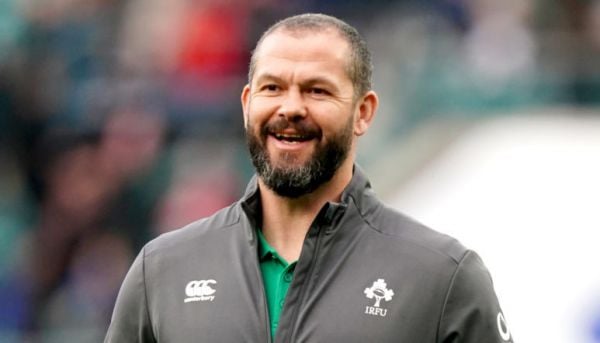 Andy Farrell admits he was a bit embarrassed by his nomination for world coach of the year as he attempts to mastermind one final win of an unforgettable 2022.

Ireland shot to the top of the world rankings on the back of a Six Nations Triple Crown and a historic series success in New Zealand before underlining that status by toppling world champions South Africa.

Defeats to France in Paris and the All Blacks in Auckland are the only blots on an impressive record of eight wins from 10 Tests ahead of Saturday evening’s autumn finale against Australia.

Introducing your nominees for the 2022 World Rugby Coach of the Year title.#WorldRugbyAwards pic.twitter.com/4sI7Wu5zIj

Yet the former England assistant was eager to shun the spotlight and divert attention to the collective achievements of his staff and players.

“It’s quite embarrassing really, in regard to you’ve heard me say plenty of times that we do this together,” he said of being up for the award, which will be presented to the winner on Sunday.

“When a coach gets any recognition, never mind the coaching staff that are top class in our group, the rest of the staff, the team and how everyone pulls together, we do it together.

Farrell hopes to cap a stellar 12 months by inflicting further misery on a wounded Wallabies side, who travelled to Dublin on the back of a humiliating first defeat to Italy.

Australia head coach Dave Rennie has opted for 10 alterations to the team which began the shock 28-27 loss in Florence.

Farrell, who has made eight personnel changes from last week’s win over Fiji after a host of star names recovered from injuries, is wary of a “very dangerous” opponent.

“There is a good majority of our players who have never played against Australia before and don’t quite know the mentality of the Australian team,” he said.

“I’ve played against Australia all my life and I know the mentality.

“They know they can beat anyone in world rugby on any given day and that’s why they’re such a threat and when you add to that Dave Rennie, we know what he brings to a team.

“He’s a wise, wise coach that has been around for a long time and won a lot of things. He’s a very shrewd coach so they are very dangerous and it’s a perfect game for us at the weekend.”