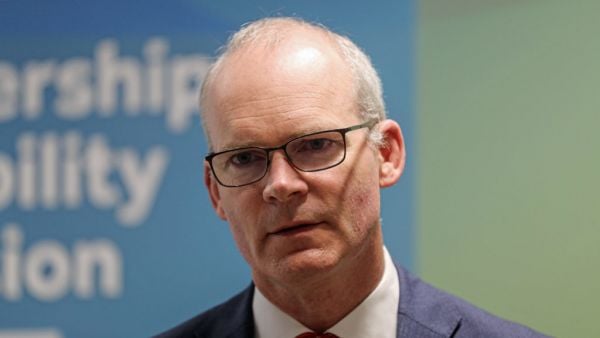 The Foreign Minister has expressed optimism that the UK and European Union can reach a deal on the Northern Ireland Protocol but cautioned there are just weeks to do it.

The UK government moved to delay the calling of fresh Stormont elections amid protests from the DUP who have demanded action on the post-Brexit trading arrangements before they will re-enter devolved government in Belfast.

Unionists have opposed the protocol as impeding trade between Northern Ireland and Great Britain, placing a border in the Irish Sea.

This has resulted in the collapse of the Stormont Assembly, with top civil servants left to run government departments.

He said that while there is a better atmosphere, and things are heading in the right direction, good will and trust is “not sufficient”.

On Saturday, Foreign Minister Simon Coveney said he is more optimistic than he has been in a number of years that it is possible for the EU and the UK to resolve their differences on the Northern Ireland Protocol.

He was speaking at a side event on Northern Ireland during the Fine Gael Ard Fheis in Athlone on Saturday.

Former SDLP leader Alasdair McDonnell was among those who attended the side event.

“I don’t say that lightly,” Mr Coveney said. “Since the new Prime Minister Rishi Sunak has taken charge of No 10, there has been a very clear effort coming from the British government to try to reset the relationship with the Irish government. That is welcome and we have responded positively to that.

“I think if that spirit of compromise in order to agree landing zones in certain areas that are currently sources of disagreement, if we get that approach from the British government, I believe, between now and the end of the year, we can make very significant progress.

“A window has been created between now and mid-January to, I hope, make significant progress on settling these outstanding Brexit-related issues once and for all.

“I am hopeful there will be a serious effort in the coming week, and we are talking about weeks, not months, in order to do that.”

Mr Coveney described the stakes as “high” just months before the 25th anniversary of the Belfast Agreement.

“In truth, if we can’t get devolved institutions up and running in Northern Ireland, finding an alternative is not easy,” he said.

“From our perspective, direct rule is not the answer for Northern Ireland. For many in the unionist community, other arrangements involving the Irish government is not acceptable either. For some they want to move past that and move towards a border poll for a more fundamental change.

“The position that I have tried to ensure that this party has been in and that the government has taken, is that we need to focus for now on rebuilding relationships that have fundamentally broken down in the last number of years.”