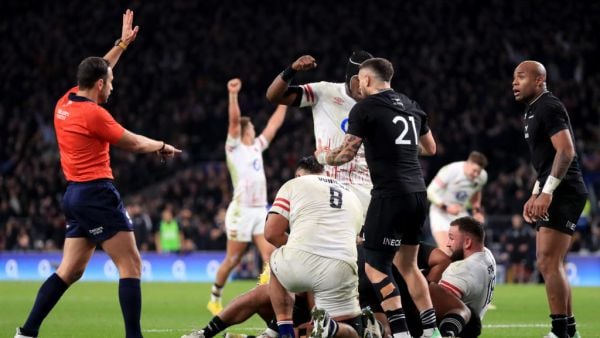 England snatched a sensational draw on an evening of high drama at Twickenham after Will Stuart crossed in the dying seconds to hold New Zealand to a 25-25 stalemate.

Trailing 25-6 with nine minutes to go and a distant second best in all departments, Eddie Jones’ men exploded into life with two tries from replacement prop Stuart and full-back Freddie Steward.

Less than a minute was left on the clock when Stuart burrowed over close to the posts and with Marcus Smith converting, a hopeless situation had been rescued in the most thrilling way imaginable.

The All Blacks must now live with fresh misery inflicted by England, their defeat in the 2019 World Cup semi-final in the most recent clash between the rivals followed by this extraordinary capitulation.

Seemingly fuelled by the frustration of their 19-7 defeat in Yokohama three years, New Zealand tore into Jones’ side from the first whistle.

They led 17-3 by the interval after crossing through Dalton Papali’i and Codie Taylor, but England’s unfortunate rookie scrum-half Jack van Poortvliet helped them with a series of errors.

Rieko Ioane’s electric try with half an hour left built what appeared to be an unassailable lead, but England had other ideas in a match that was marred by the fussy refereeing of Mathieu Raynal.

Van Poortvliet has barely put a foot wrong in his six caps, but the 21-year-old scrum-half gifted New Zealand their first try when his pass off a well executed line-out was easily picked off by the lurking Papali’i who ran half the pitch to score.

The All Blacks had started like a freight train and England were stunned when they ran in a second try in the ninth minute, their maul defence crumbling for Taylor to cross.

Van Poortvliet’s nightmare continued when he was hunted down while taking too long with his clearance kick but the ensuing try by Ioane was ruled out because of a neck roll by the New Zealand centre on Owen Farrell, who was winning his 100th cap.

When they had possession England attacked with urgency through their ball carrying forwards and Sam Simmonds, Maro Itoje and Billy Vunipola made sizeable dents that forced the tourists to scramble.

An action packed opening quarter settled down into a series of scrums, penalties and free-kicks with play unfolding between the two 22s, but when the fireworks resumed it was the All Blacks lighting the fuse and only committed home defence limited them to a Jordie Barrett penalty.

Farrell was struggling with an ankle injury and while the centre soldiered on, Smith had taken over the kicking duties to land three points.

It was the Harlequins fly-half’s delayed pass that created a half-chance for Manu Tuilagi only for the Sale centre to be stopped short and after a tidal wave of pick and goes, England were penalised on the line for going to ground.

An opportunity had gone begging and they were made to pay as the All Blacks sprung into action, seizing on Simmonds losing the ball in contact to construct a brilliant try from their own 22.

Beauden Barrett chipped crossfield for Caleb Clarke who turned and offloaded to Ioane on the loop and the outside centre had the gas to race over.

Beauden Barrett landed a drop-goal and was then sin-binned for holding on to Smith and England were finally over in the 72nd minute through Stuart.

Under two minutes later and they were in again, a stunning counter-attack that was finished by Steward shredding New Zealand’s defence before another sweeping move was finished by super-sub Stuart with Smith sealing the draw.