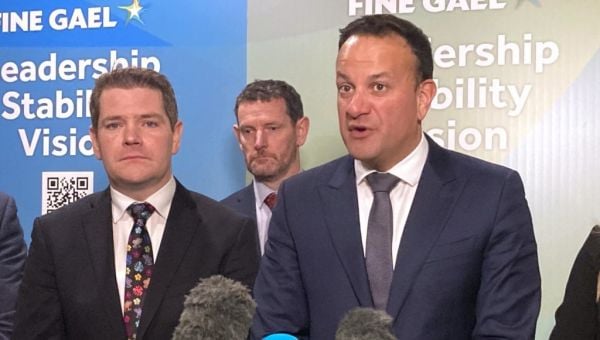 Fine Gael members have gathered for the party’s first in-person annual conference since 2019.

The party’s leader, Tánaiste Leo Varadkar is set to take over as taoiseach next month under the terms of the agreement that saw Fine Gael, Fianna Fáil and the Green Party come together to form a government after the last general election in January 2020.

Speaking at the start of the Ard Fheis, Mr Coveney said they are looking forward to “privilege” of a Fine Gael taoiseach for the next two years in a government which he described as “working well together”.

Ministers @simoncoveney and @Paschald speaking to the media at the start of our 81st Ard Fheis.

You can watch live on our social media channels from 10.30am this morning. #FGAF22 pic.twitter.com/66zkALtxod

“I’m cognisant of the fact that we have a lot more to do, particularly in the areas of housing and healthcare reform but really determined to do that, and to lay the foundations for a proposition for the electorate who will also be looking to the future given all of the uncertainty that we’re looking to navigate at the moment in terms of international influences on Ireland,” he said.

He added that he feels the Government will be able to “strike a contrast” in how its planning for Ireland’s future, “and the way in which some opposition parties are promising populist radical change which we don’t believe to be serious or credible”.

Minister for Finance Paschal Donohoe added: “Even though this will be a day that will be positive in terms of the number of people that are attending, the debate we’ll be having with each other, we’re very much aware of the challenges that so many households and businesses are facing at the moment.

“This is why a focus for recent months has been how we can put money back in their pockets, how we can use an economy that has been well managed.

“We have had a focus on restoring stability in our public finances.”

Mr Coveney said there will be also be a “change of personalities in certain jobs” next month when Mr Varadkar returns to the role of taoiseach, but said those changes will be a matter for party leaders.

“The partnership between the coalition partners will remain as strong as we’ve seen in recent months.

“I think you’ll see a lot of consistency, but of course it’s a huge privilege for Fine Gael to have our leader back in the Taoiseach’s office, and I know he’s really looking forward to that.”