THE mighty Myshall camogie team have had to dig deep before to grind out results and they did so once again with a simply magnificent win in Meath against Na Fianna.

They faced a second half onslaught from the home side but set up a Leinster Final next against James Stephens of Kilkenny thanks to Caoimhe Jordan’s 60th minute winning point in today’s Leinster Intermediate Camogie Championship semi-final. 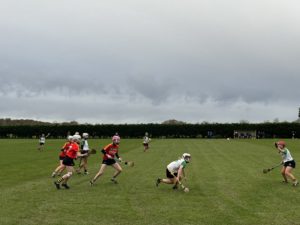 Playing with a decent wind at their back, Myshall were flawless during a brilliant first half and led 0-6 to 0-0 at the break. The only slight complaint you could have about their first was that maybe they should have had a couple more scores to tell the tale of their dominance.

Na Fianna had double All-Ireland Football winning captain Shauna Ennis in midfield but it was the Myshall stars around the middle third that stood up and dominated the opening 30 minutes.

Still, the job was far from done. The feeling at the break was that if the home side could get a couple of early scores in the second half then the game could take on a completely different complexion, and so it proved.

Erin Leddy scored their first point of the game in the 34th minute from a free, and she quickly followed that with a score from play.

As in the first half, play was flowing in all one direction only this time it was Na Fianna with the momentum. Leddy converted another free in the 39th minute to continue the pressure.

Ciara Quirke stemmed the flow of scores with a magnificent free from near the left sideline in the 41st minute but there was a major let off shortly after.

Maire Kirby’s shot from the left was well saved by Laura James but Kerrie Cole looked certain to score on the rebound but somehow Myshall scrambled the ball behind. Leddy did at least convert from the resulting 45.

Leddy added frees in the 48th and 54th minutes to leave just the minimum between the teams and when she scored again in the 58th minute, it seemed only a matter of time before Na Fianna got the winner.

However, they received a sucker blow in the 60th when Jordan just about found enough space to squeeze over what turned out to be the winning score.

Na Fianna pushed on during injury time but nothing would fall their way against a well disciplined Myshall defence, where Kate Nolan was as magnificent as always, and the final whistle signaled another brilliant win for this fantastic group of players.

The only downside on the day was an injury to corner back Kira Nolan after she twisted her knee and she will now be in a race to be fit as Myshall bid to win their first Leinster title since they defeated Shinrone in 2016.

***See Tuesday’s edition of The Nationalist for a full report and reaction from this win.