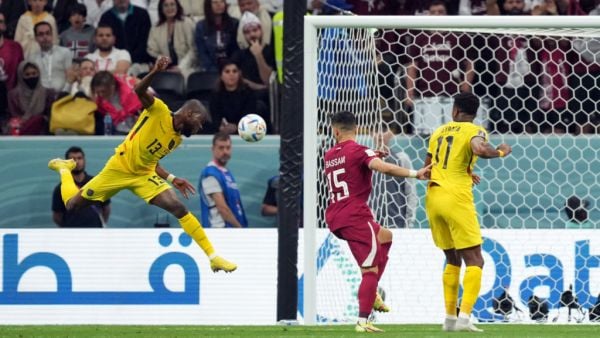 Qatar’s World Cup party fell flat on the opening night as a brace from Ecuador captain Enner Valencia condemned them to a 2-0 defeat.

The tiny Gulf state was desperate to get off on the right foot from a sporting perspective, after years of criticism over the award of the World Cup to the country.

But Valencia’s first-half double – a penalty and a perfectly-placed header – proved too much for the hosts, who face even trickier tasks next up against Senegal and the Netherlands.

Felix Sanchez’s Qatar side are the reigning Asian champions, and can probably claim to be the most well-drilled side at the tournament, with all the squad home-based and having played 11 friendlies since July alone.

However, they became the first hosts to lose the opening match in the tournament’s 92-year history on Sunday evening at the Al Bayt Stadium in Al Khor, with the venue looking noticeably less full when the second half got under way.

Ecuador thought they had taken an early lead when goalkeeper Saad Al Sheeb twice flapped at a free-kick, Felix Torres acrobatically hooked the loose ball across goal and Valencia headed in from close range.

However, Italian official Daniele Orsato ruled it out after a marginal call against Michael Estrada from the new semi-automated offside technology being used at the tournament.

The hosts’ reprieve was short-lived though as Al Sheeb mistimed a challenge on Valencia in a one-on-one and tripped him in the box in the 15th minute. The former West Ham and Everton man made no mistake, calmly rolling the penalty into the right-hand corner.

Qatar were struggling for possession and territory as Ecuador eased into control, and the lead was doubled half an hour in.

Brighton’s Moises Caicedo was allowed to drift diagonally from left to right and laid the ball off to right-back Angelo Preciado, whose whipped cross was met by a precise header into the corner by that man Valencia again.

Qatar almost pulled one back in the final seconds of the first half but Almoez Ali was unable to get good enough contact as he headed Hassan Al Haydos’ cross wide.

Ecuador were quickest out of the blocks in the second period too and Al Sheeb had to punch away an effort from Romario Ibarra.

Akram Afif arrowed over a long-range shot with a quarter of an hour to go, but it appeared the hosts were running out of ideas.

Valencia left the field soon afterwards, with Jhon Cifuente coming on to replace him.

Jeremy Sarmiento, who became the third Brighton player on the pitch when he came on as second-half substitute, was relieved that an offside was called after he fired over a glorious chance when the ball broke to him in space.

By this stage fans in traditional Arabic dress could be seen flocking for the exits in droves, having clearly given up on any hope of a late comeback, with substitute Mohammed Muntari’s late effort landing on the roof of the net.