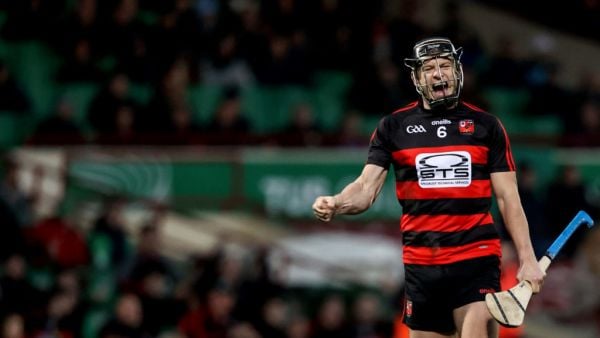 Evergreen Pauric Mahony came up with 13 points as his Ballygunner side turned on the charm in the second half to reach next month’s Munster final against Ballyea.

The 3,321 crowd in LIT Gaelic Grounds were treated to a thriller but Na Piarsaigh were a shadow of themselves on the turnaround, scoring just four second-half points.

Trailing by five at the break, Mahony almost single-handedly ate into Na Piarsaigh’s lead. Patrick Fitzgerald’s 40th-minute goal from a Stephen O’Keeffe puck-out made it a one-point game, Mahony levelled the game seconds later and then put them ahead with a free.

Na Piarsaigh levelled it up in the 45th minute but Conor Sheahan turned up with a brace of points and Ballygunner never looked back. Ronan Power and Mahony doubled their advantage to four. Keith Dempsey brought Na Piarsaigh to within a score but Mahony capped off a virtuoso display with two further points.

Na Piarsaigh’s start was brighter as they rattled off the first three points, two of them Kevin Downes frees. Ballygunner settled with a couple in the space of three minutes, but the Limerick winners strung another three together as Ballygunner’s puck-out suffered.

Dessie Hutchinson’s 14th-minute goal, taking receipt of a tidy pass from Fitzgerald before rifling to the net, brought the All-Ireland champions to within a point. Downes was quick in responding with a long-distance point but Ballygunner’s tails were up, especially Mahony’s after he had endured a shaky start with three wides.

In a rambling role around the half-forward line, he sent over two points in the space of 60 seconds but the lead was shortlived as in the 20th minute Will O’Donoghue split open the Ballygunner defence to find his on-running midfield partner Keith Dempsey and he beat O’Keeffe.

Pauric Mahony replied swiftly with his third point from play but Na Piarsaigh’s timing and their running from deep was causing Ballygunner’s seasoned half-back line trouble. The margin was two points in Na Piarsaigh’s favour when Jerome Boylan broke through in the 26th minute, finding Daithí Dempsey who handpassed over his shoulder to Conor Boylan and his strike was empathic.

Elsewhere, Galway’s Moycullen got the better of Roscommon’s Strokestown after extra time to book their spot in the Connacht club football decider.

Moycullen prevailed by 2-8 to 7 points and will now play Tourlestrane of Sligo.

Slaughtneil of Derry are into the Ulster club hurling final after they defeated Down’s Portaferry by 2-24 to 11 points.

The Galway hurling final will go to a replay after it ended St Thomas’ 1-17 Loughrea 20 points.