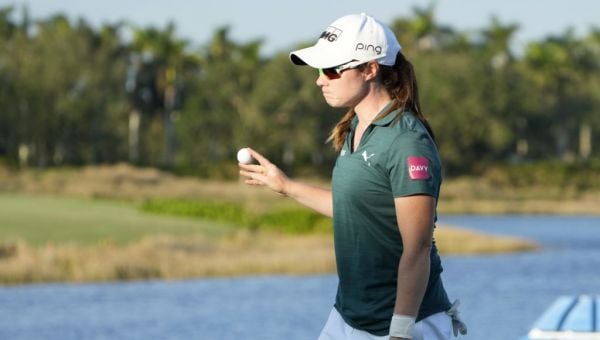 The largest cheque in women’s golf was on the line after Leona Maguire shot the third round’s best score to share the top of the CME Group Tour Championship leaderboard with Lydia Ko.

The Irishwoman (27) started the day seven strokes behind her New Zealander opponent, but raced into contention with a bogey-free 63 that was just one off the season-ending tournament’s record set by Ko in 2016.

The 20th-ranked player had nine birdies, including five in a six-hole run between holes eight and thirteen, at Tiburon Golf Club in Naples, Florida, to finish at 15 under with Ko.

Watch highlights from her Saturday 63! 👇 pic.twitter.com/pXRYHuCHlg

“I was just dialled in today,” Maguire said after play.

“My caddie has been talking the last two weeks all about patience and patience and they’re going to drop. Finally, they did today, which was nice.”

Maguire is chasing a second title, to go with the trophy she claimed at this year’s Drive On Championship, and victory in the two-million-dollar (£1.6million) event would ensure she passes the four-million-dollar (£3.2million) mark for career earnings.

18 holes remain after an action-packed Saturday in Florida

Watch some of the top shots from the third round of the @CMEGroupLPGA! 👇 pic.twitter.com/LeAn1dujCH

Third-ranked Ko, meanwhile, had her worst round at this year’s tournament, carding 70 after mixing four birdies with two bogeys.

The 25-year-old began the week with a one-point lead for LPGA player of the year and remains on track to also lift her second straight Vare Trophy for the lowest scoring average.

Scotland’s Gemma Dryburgh and Jeongeun Lee of South Korea were five strokes back from the leaders at 10 under, with Englishwomen Georgia Hall and Jodi Ewart Shadoff at seven under and six under, respectively.