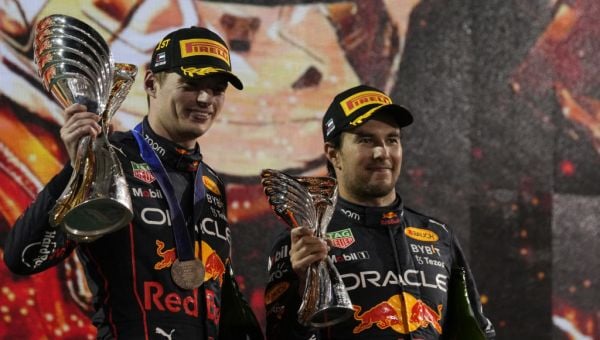 Max Verstappen brought the curtain down on the 2022 Formula One season by taking victory at Sunday’s Abu Dhabi Grand Prix.

Verstappen claimed his maiden championship following F1’s most contentious race here in Abu Dhabi a year ago. But the 2022 campaign has belonged solely to one man.

The Dutch driver’s title defence started in turbulent fashion after he failed to finish two of the first three races with mechanical failures. But he won 11 of the next 15 rounds to secure his second crown at October’s Japanese Grand Prix with four races to spare.

He ends the year with 15 victories – a record number for a driver in one season.

Formula One motorsport boss Ross Brawn oversaw the design of this year’s new cars in the hope of bringing the field closer together, and spicing up the show.

But Red Bull – with Adrian Newey at the design board and Verstappen at the wheel – have nailed the new regulations, paving the way for the most one-sided F1 campaign in recent memory.

The team from Milton Keynes have won 17 of the 22 rounds, with Sergio Perez taking third spot behind Ferrari’s Charles Leclerc. The Ferrari man’s P2 in Abu Dhabi denied Red Bull a first one-two finish in the driver standings, but they ended eight years of Mercedes dominance by taking their first constructors’ title since 2013.

However, Red Bull’s success was tarnished by a breach of last season’s budget cap. They were handed a £6million fine and a 10 per cent reduction in aerodynamic testing time over a 12-month period.

Hamilton started the season with a hangover from his controversial Abu Dhabi defeat. His Mercedes was uncompetitive – as the Silver Arrows battled porpoising – and Hamilton struggled for form.

The 37-year-old qualified 15th at the second round in Saudi Arabia before scrambling to 10th. Worse was to come two races later in Imola when he started 14th and finished only one spot higher, a lap behind Verstappen.

Hamilton started to look more like his old self as the season wore on, but he ends the year without recording a single victory – the first time that has happened since he made his debut in 2007.

Leclerc looked to be a real contender after he started the season with two victories from three. But his season fell apart through mistakes by man and machine.

The Monegasque spun in Imola, and crashed out from the lead in France, while mechanical failures and a series of high-profile strategy errors also contributed to his downfall.

Ferrari finished second in the constructors’ standings but Mattia Binotto’s position as team principal remains delicate amid reports in Italy that Sunday’s Abu Dhabi race would be his last in charge.

He received a vote of confidence from the team’s chairman John Elkann earlier this week, but do not be surprised if he is not on the Ferrari pit wall for next season’s opener in Bahrain on March 5.

Carlos Sainz took the maiden win of his career following a wild and wacky race which saw Zhou Guanyu survive a horror opening-lap crash and protesters invade the track at Silverstone.

Rookie Zhou ended up on his roof and out of control before he slammed into the tyre barrier and was launched into the fencing.

Fans and photographers ducked for cover at the opening corner with Zhou trapped in his Alfa Romeo. An extraction team rushed to his aid, and the 23-year-old, in just his 10th race, was carefully removed and taken away in an ambulance, but he escaped without injury.