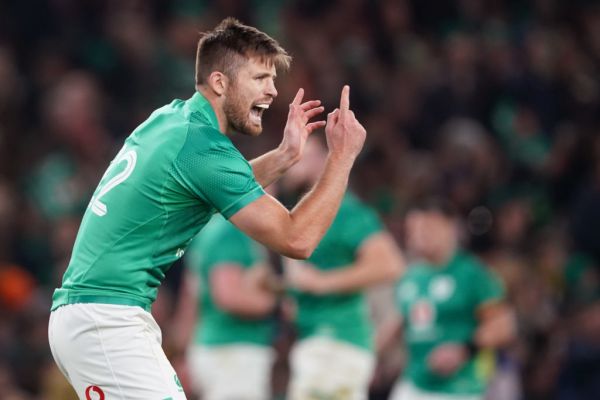 Ross Byrne says his dramatic match-winning penalty against Australia is the highlight of his Ireland career after he capped “one of the most bizarre weeks” by returning from the international wilderness with a bang.

Fly-half Byrne was left out of Andy Farrell’s initial autumn squad and was still behind Johnny Sexton and Jack Crowley in the pecking order having been called up on Monday as injury cover for Joey Carbery.

The 27-year-old had not featured for his country since March 2021 but found himself elevated to the bench for Saturday evening’s 13-10 win over the Wallabies due to a late calf problem suffered by captain Sexton.

He ended his lengthy Test exile by replacing full debutant Crowley, before holding his nerve to land the decisive three points from a tricky kick wide on the right with just three minutes remaining.

“I don’t really know how to put it into words,” said the Leinster player. “It’s been one of the most bizarre weeks ever.

“I got the call on Monday after Leinster training, came in Monday night as cover, did the warm-up and then got the call when Johnny pulled up.

“It’s definitely the highlight of my Ireland career, that’s for sure.

“It’s right up there, it’s what you dream of. They’re the moments as a kid that you want.

“Obviously I haven’t been in the squad for quite a while so to be called in and just to be back was brilliant.”

Byrne was taking part in pre-game kicking practice with Sexton when his provincial team-mate pulled up with the leg muscle issue.

His unexpected elevation to the matchday 23 meant his parents were not at a sold-out Aviva Stadium, though his girlfriend attended on the off-chance he might feature.

He even received the added pressure of a 30-second warning from referee Ben O’Keeffe before nailing the vital kick.

“I just trust the process that I have, it’s been pretty good to me in the last number of years,” he said.

“Referees will do that to me a bit sometimes, so it’s something I’m kind of used to. It doesn’t faze you when it happens, it probably makes the mind go blank if anything.”

Munster pair Carbery and Crowley, Leinster duo Ciaran Frawley and Byrne’s brother Harry, and Connacht’s Jack Carty have each been given opportunities to cover for undisputed first-choice Sexton during that time.

“It’s been frustrating,” said Byrne “But I think the season has gone well for me at Leinster.

“I just have to try and kick on. I’ve had to be patient, and sometimes you need a bit of luck, I got that and got the opportunity.

“It’s given me a taste of it. If I play well there that hopefully leads to the opportunity to be picked for Ireland.”

Crowley, who only made his Test debut as a replacement in last weekend’s win over Fiji, kicked Ireland into a 3-0 half-time lead and then added the extras following Bundee Aki’s try.

With another Six Nations campaign and a World Cup on the horizon, Byrne feels optimistic for his country’s future.

“The quality of rugby in Ireland at the moment is probably the best it’s ever been,” he said.

“Over the last number of weeks it’s a special team, and even with a few changes they still delivered.

“Even though we probably weren’t at our best (on Saturday), we still managed to win the game.