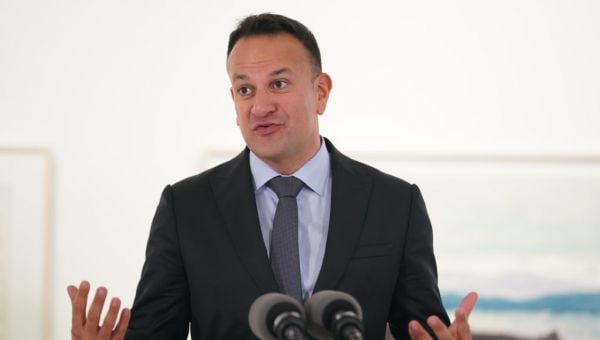 There is “light at the end of the tunnel” for first time buyers looking to buy their own homes, according to the Tánaiste.

His comments follow the Fine Gael Ard Fheis yesterday, where he addressed the issues of homeownership and emigration among young people.

According to a recent Red C poll, more than one-third of 25 to 34-year-olds say they are considering emigrating to enjoy a better quality of life.

Leo Varadkar said the number of first time buyers is at its highest level in 15 years but Government targets for home building next year “are at risk”.

Varadkar said the target of 24,600 new homes by the end of this year will be exceeded, with close to 28,000 properties being built.

He said however that delivering more than the 30,000 homes under Housing for All in 2023 is “going to be a challenge”.

He told RTÉ’s The Week in Politics show: “We need to face up to that (targets at risk) and take every action that is possible, and I’m up for any action that is necessary, working with Darragh O’Brien (Minister for Housing) and our colleagues in government, and it needs to be a whole of government effort.”

He said some things are out of their control, such as the cost of commodities rising due to the war in Ukraine.

He said: “16,000 individuals and couples bought their first home in the last year, that’s more than any year in 15.

“We have to do everything we can in the next couple of months and over the next two years to make sure that we accelerate more housing construction.”

Mr Varadkar said he absolutely acknowledges that “more needs to be done on housing”.

He said he is “determined next year and the year after to drive that forward, that we implement and accelerate housing for all”.

Mr Varadkar added: “I’m absolutely determined that we do that, that we see even more first-time buyers buying their first home next year.

“We want to see well above 15,000 a year and that we build more than 30,000 new homes next year, and it’s going to be a challenge, but that’s what we have to do, we have to work together to make that happen.

Darragh O’Brien has been Housing Minister for over two years and the housing crisis has only worsened on his watch.

Next week, Sinn Féin will will bring a motion in the Dáil declaring a housing emergency. We are also urging support for the upcoming Raise The Roof rally @EOBroin pic.twitter.com/kZg222Fzp7

“I think what we can have is stronger Government interventions to help close the viability gap.”

Meanwhile, Sinn Féin has said it will bring a motion to the Dáil this week to declare a housing emergency.

Eoin Ó Broin claimed the housing crisis has “worsened” during the two years that Minister for Housing Darragh O’Brien has been in post.

“This Government has shown time and time again that it is incapable of getting to grips with the housing crisis. In the meantime, ordinary people across the state pay the price,” he said.