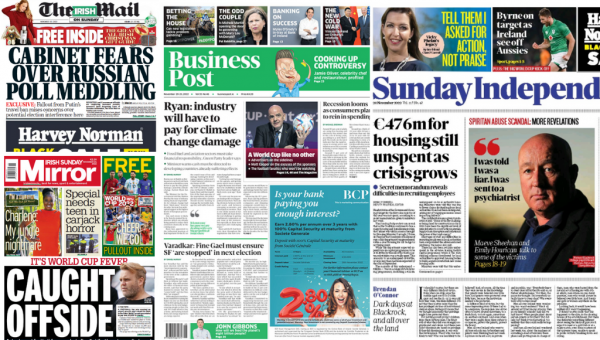 The arrival of the 2022 World Cup, recession fears, and unspent housing funds are some of the stories splashed across Sunday’s front pages.

The Business Post quotes Minister for the Environment Eamon Ryan warning ‘industry will have to pay for climate change damage’. The paper also reports that consumers are planning to ‘rein in spending’ amid an uncertain economic outlook.

Our front page today. Pick up a copy in stores or subscribe at https://t.co/u5ystSGUtr for these stories plus:

The paper also covers a fatal crash in Co Kilkenny, in which a teenage girl was also injured after the car she was in was stolen on Friday.

The Irish Sunday Mirror covers the court appearance of a ‘Qatar-bound football fan’ who was arrested in Dublin Airport after climbing over a hoarding to avoid security screening. 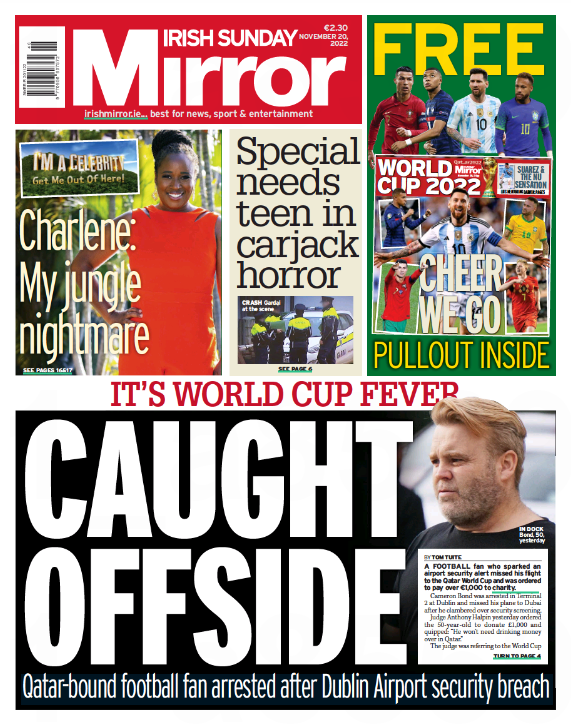 Finally, The Irish Mail on Sunday leads with: ‘Cabinet fears over Russian poll meddling’, reporting the Government is planning to increase security ‘amid deepening fears of Russian infiltration’ following sanctions placed on 52 Irish politicians earlier this week by the Kremlin. 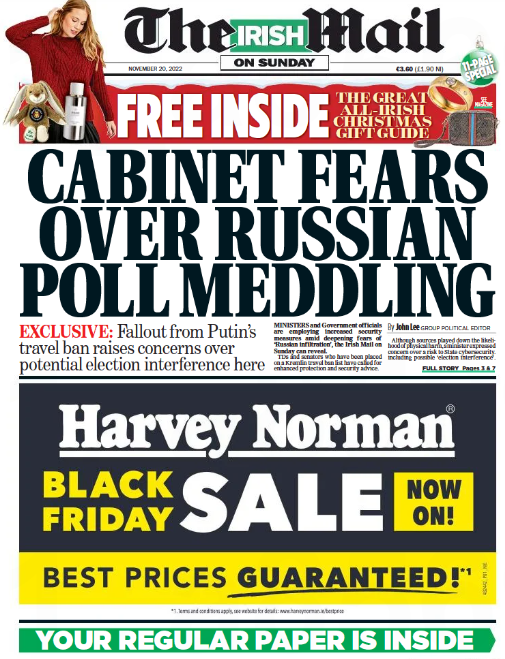 In Britain, Sunday’s front pages revolve around the World Cup.

The Daily Star Sunday and the Sunday Express react to the “bizarre speech” of Fifa president Gianni Infantino on the eve of the tournament in which he hit back at criticism of Qatar and said he felt “African, gay, disabled and (like a) migrant worker”.

The speech has been dubbed “beyond parody” by raging fans. #TomorrowsPapersTodayhttps://t.co/qcFX19LX5l pic.twitter.com/ZnanqRqVnp

The coverage of the Sunday Mirror and Sunday People is more celebratory and patriotic, encouraging England to get behind the Three Lions.

Elsewhere, The Sunday Times reports that senior UK government figures are planning to put the country on the path towards a Swiss-style relationship with the European Union.

The Mail on Sunday declares there will be a “bonfire of the NHS pen pushers” in an apparent re-write of the integrated review which followed the autumn statement.

The Conservatives still want to cut taxes before the next election, party chairman Nadhim Zahawi has said, amid growing anger from party members over the aforementioned statement, The Sunday Telegraph reports.

‘Zahawi: We want to cut tax before election’

While The Independent has experts warning that NHS funding pledged by Jeremy Hunt is hundreds of millions of pounds short of what is required to improve care in the crisis-hit health service.

UK Labour leader Sir Keir Starmer “will abolish (the House of) Lords to restore trust in politics”, The Observer splashes.

And The Sun on Sunday claims Boy George has threatened to quit I’m A Celebrity in an “explosive rant at crew after they refused him a ride in a golf buggy”.

On tomorrow’s front page: Boy George threatened to quit I’m A Celebrity in an explosive rant at crew after they refused him a ride in a golf buggy.https://t.co/fL7UPV2KwV pic.twitter.com/uWR8R7xEut