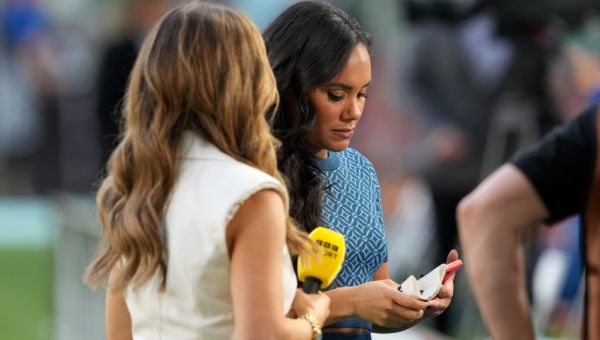 Alex Scott has been seen wearing a One Love armband on air as she presented the BBC’s Qatar World Cup coverage in Doha.

💻🖥📱 Watch on @BBCiPlayer, listen on @BBCSounds, get more on the @BBCSport app#BBCFootball #BBCWorldCup pic.twitter.com/4pMU2albY7

The band contains the rainbow colours associated with the Pride flag. Qatar is a country which criminalises same-sex relationships.

England and Wales, along with other European countries, said they will not wear a rainbow-coloured anti-discrimination armband in their World Cup matches after FIFA threatened them with sporting sanctions.

Scott received praised for wearing the band from Ampthill rugby player Charlie Beckett, who tweeted: “I have immense amounts of respect for Alex Scott, standing up for what she believes in no matter the consequences.”

Pride in Football, which represents LGBT+ fan groups in the UK, wrote on Twitter: “England may not be wearing the #OneLove armband, but @AlexScott is right now on BBC.

“This is more than just LGBTQ+ rights, this is Human Rights.”

In a 2022 memoir How (Not) To Be Strong, Scott said that she and Arsenal and England teammate Kelly Smith were in a relationship.

On Sunday, Scott also spoke about LGBT rights in Qatar during the opening of the BBC’s coverage of the World Cup:

She said: “A whole heap of fans from around the world from the LGBTQ+ community not wanting to travel here…”

“We reference (FIFA president) Gianni Infantino from what he said… you are not gay, you will never understand travelling to a country where you are fearing for your life just because of who you choose to love.

“To keep saying football is for everyone, we sit here and it’s not, because people have not been able to travel to watch their teams, to support their teams, out of fear.”

Infantino delivered an hour-long speech in a pre-tournament press conference in Doha in which he declared “today I feel gay” and “I feel (like) a migrant worker” before taking aim at European critics of Qatar.

A joint statement from seven European nations who had signed up to the One Love campaign – which included England and Wales – confirmed on Monday the armbands would no longer be worn due to fear of a yellow card being issued.

“FIFA has been very clear that it will impose sporting sanctions if our captains wear the armbands on the field of play,” the statement began.

“As national federations, we can’t put our players in a position where they could face sporting sanctions including bookings, so we have asked the captains not to attempt to wear the armbands in FIFA World Cup games.

But we remain with the belief that football is for everyone and stand with our LGBTQ+ members of the Welsh football family.

FIFA announced its own armband on Saturday to highlight a series of social campaigns at each stage of the tournament.

“No discrimination” was due to be the theme for the quarter-finals but the global governing body confirmed on Monday, within seconds of the joint FAs’ release, that it had been brought forward.

FIFA has worked to receive assurances from the Qatari authorities that rainbow flags carried by supporters are allowed at stadiums and everywhere else.

The statement also reminded teams that “For FIFA Final Competitions, the captain of each team must wear the captain’s armband provided by FIFA”.

England captain Harry Kane wore a FIFA No Discrimination armband at the tournament on Monday.

The FIFA statement added: “FIFA is an inclusive organisation that wants to put football to the benefit of society by supporting good and legitimate causes, but it has to be done within the framework of the competition regulations which are known to everyone.”

Scott made history in 2018 as the first female Sky pundit on a Sky Sports Super Sunday.

She also joined the BBC World Cup commentary line-up and will present Sports Personality Of The Year 2022.