Cocaine and firearms seized by gardaí during Finglas raid 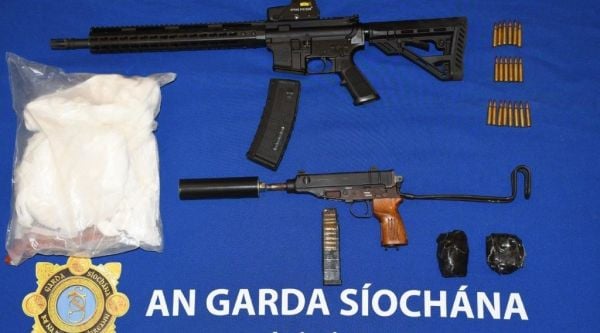 Gardaí have seized approximately €210,000 worth of cocaine, the force said, along with two firearms and ammunition following a raid in Dublin.

The search operation occurred in a “residential complex” in Finglas, on the city’s northside, and was part of a wider operation targeting organised crime in the capital.

The €210,000 worth of cocaine, as well as a pre-rolled cannabis joints and “mixing agents” were seized and forwarded to Forensic Science Ireland for analysis.

The firearms seized included an assault rifle-type gun, and a machine pistol with accompanying silencer.

No arrests were made, and investigations are ongoing,  gardaí said.

As part of ongoing operations targeting organised criminal activity in the DMR West and Operation Tara, Gardaí have seized €210,000 worth of suspected cocaine, two firearms and ammunition. pic.twitter.com/ZxdsTKMDz5

Following the seizures, Chief Superintendent Finbarr Murphy of DMR West Garda Division said that the purpose of the firearms were to “imtimidate, harm and kill”.

“I commend all of my colleagues involved in this operation on the recovery of these lethal weapons, which have now been removed from the control of criminal gangs.

“These searches are part of ongoing activity by the Gardaí in Finglas, supported by Regional and National Units, intended on keeping the people of Finglas and the wider community safe.

“I continue to appeal to communities, to engage and work with their local Gardaí; by working together we can all play our part in keeping our families, friends and neighbours safe,” he said.