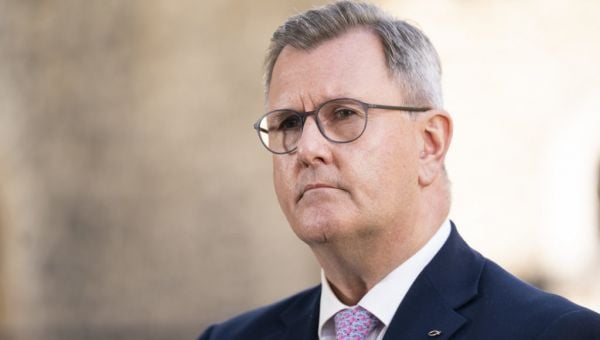 DUP leader Sir Jeffrey Donaldson has said he regrets making a claim that the Northern Ireland Protocol had delayed some heart surgeries from going ahead.

Mr Donaldson said he accepted the information about surgeries in Northern Ireland was “not entirely accurate”.

Earlier this month, the Southern Health and Social Care Trust said 20 patients were transferred to the care of the Belfast Trust in August after it could not secure needed cardiac replacement kit in the UK or Ireland due to its size.

Speaking at the time, the DUP leader said healthcare “isn’t helped when access to medicines is impaired and inhibited” by the protocol.

He added: “How does that help people waiting on surgery, on life-saving treatment, that the protocol is preventing the health service from getting what it needs to provide that treatment? That’s why we need a solution on this.”

The trust said at the the time that issues securing equipment was not linked to the protocol.

Speaking to the media on Monday, Mr Donaldson said: “I obviously spoke on the basis of the information that had been given from reliable medical sources.

“That information was not entirely accurate and it was placed in the public domain by me and I regret that this happened.”

He continued: “I accept the trust’s explanation that on this occasion it was the size of the equipment was the issue and they were able to source it from the supplier in Germany – and that the protocol on this occasion was not the problem.”

Mr Donaldson previously made similar remarks about delays to heart surgeries in Belfast due to the protocol – and the Belfast health trust responded to say there was no substance to his claims.

The DUP has prevented an assembly and executive from being formed in protest over the protocol, which places additional post-Brexit checks on some goods going from Great Britain to Northern Ireland.