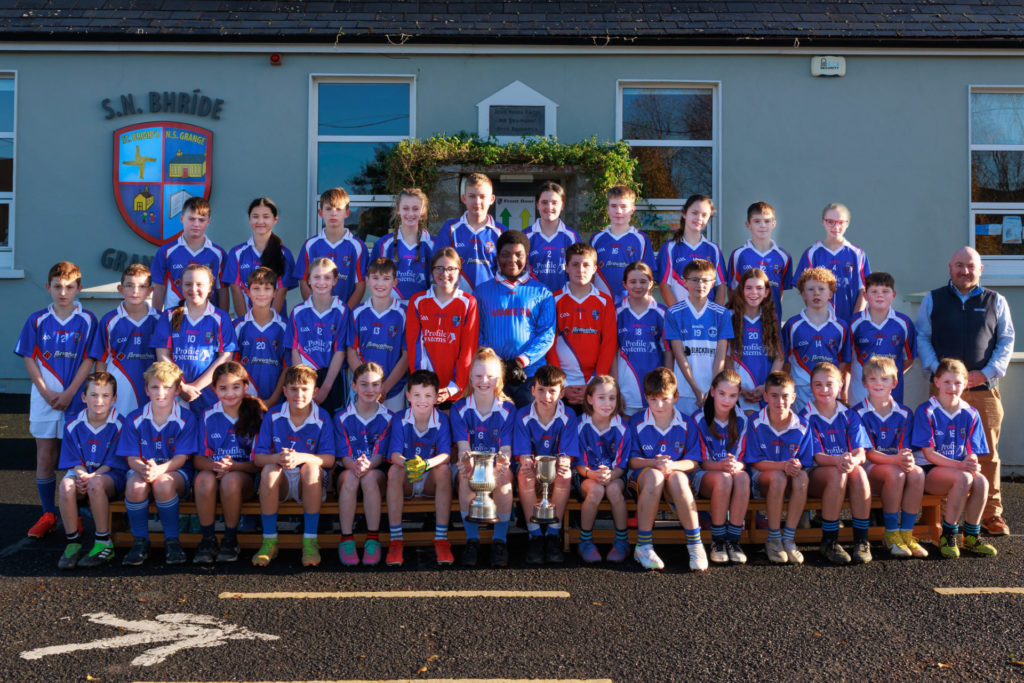 The Grange NS boys and girls teams who won their respective finals in the Cumann na mBunscoil finals in the Netwatch Training Centre, Fenagh  Photo: michaelorourkephotography.ie

AN HISTORIC and momentous achievement for Grange NS was celebrated in style last week as the school rejoiced in its double success at the recent Cumann na mBunscol finals.

For the first time ever, Grange secured wins in both the boys and girls Division 2A finals at the Centre of Excellence in Fenagh, a wonderful feat for the school and a testament to their two great teams.

“We have never won both before … so it was a first,” said proud teacher Ger Twomey.

“The boys had previously won, but the girls never had, so it was great,” he added, confirming there’s been great excitement all week at the school since their historic win.

To celebrate their success, the school welcomed along hometown hero, Grange GFC and former county player John Murphy to present the medals to the players last week.

Parents, staff and pupils cheered warmly as each pupil received their medals, followed by even more cheers when an ice-cream van arrived with treats for all!

Ger thanked the staff and parents, who supported with the training of both teams, for their commitment and dedication. He also reflected on the two very closely-fought finals and the terrific atmosphere evident in Fenagh for both finals.

The Grange NS girls won on a scoreline of 3-4 to 2-5 against Ballyconnell NS, while the boys defeated Ballinabranna NS by 5-5 to 4-4.