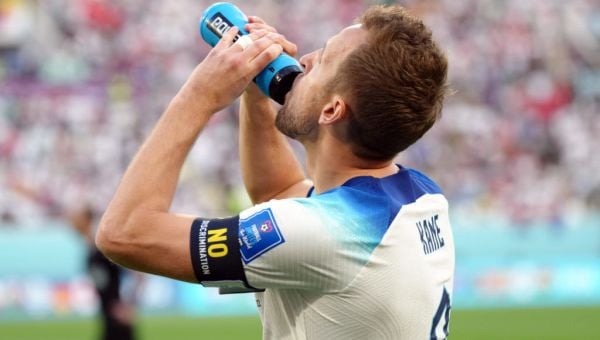 England captain Harry Kane was left disappointed after not wearing a rainbow-coloured anti-discrimination armband in their World Cup matches under threat of sporting sanctions from FIFA – while Jack Grealish said it was “a bit stupid” to prevent the skipper from doing so.

On the day England kicked off their World Cup campaign with a 6-2 win over Iran, a joint statement from seven European nations who had signed up to the OneLove campaign – which included England and Wales – confirmed the armbands would no longer be worn due to fear of a yellow card being issued.

The band contains the rainbow colours associated with the Pride flag and had been set to be a strong statement in Qatar, a country which criminalises same-sex relationships.

Kane instead wore FIFA’s ‘No discrimination’ armband – which is not rainbow coloured – after the organising body brought forward its own campaign on Saturday for the finals in Qatar.

The Tottenham striker had previously sported the OneLove armband in UEFA matches this season after the participating nations were given permission but he was unable to do so at the Khalifa International Stadium.

“We’re disappointed,” he said. “We wanted to wear it, that decision was taken out of my hands. I turned up to the stadium with the armband that I wore and I was told I had to wear that.

“Look, it’s out of our control as players. I’m sure the FA and FIFA will continue those discussions but most importantly today we focused on the game and got a great result.

“You’ve seen over the last five years we’ve made a stand as a squad and we’ll continue to do that as much as we can. We took the knee today as well but sometimes these decisions aren’t up to us and that’s the bottom line.”

Grealish, who came off the bench to score England’s last goal in their Group B rout, was asked if he had a message for the LGBTQ+ community.

“We feel strongly about it. We are with them, we wish they were here with us. At the end of the day, all I can say is we wanted to wear it,” he told ITV.

“Obviously we wanted to wear it. I think it is a bit stupid why we couldn’t. Harry himself wanted to wear it, we all wanted Harry to wear it but sometimes in life and in football things are out of your control and there’s not much you can do about it.”

The participating nations had been set to wear the armband going into the finals but, with England the first to take to the field, it was their game which garnered the most attention.

Manager Gareth Southgate said he appreciated FIFA’s stance on the matter but that the issue was not going to prove a distraction for his players.

“It’s not something that the players or myself have been involved with over the last 24 hours,” he said.

“The discussions have been ongoing between several European nations and FIFA. I do understand FIFA’s situation in that you can set a precedent and it’s very difficult then. Where do you draw the line?

“I think in an ideal world that would have been a much clearer situation earlier, but it’s not something that’s been a distraction for us because, as I said (on Sunday), we had to focus on the football.

Confusion reigned as to whether England and Wales would wear the rainbow armband until, just hours before kick-off against Iran, the nations involved issued a joint statement.

“FIFA has been very clear that it will impose sporting sanctions if our captains wear the armbands on the field of play,” the statement began.

“As national federations, we can’t put our players in a position where they could face sporting sanctions including bookings, so we have asked the captains not to attempt to wear the armbands in FIFA World Cup games.

Kane had been due to wear the OneLove armband, while Wales skipper Gareth Bale was set to sport it in the match against the United States later in the evening. A suspension is issued after two bookings in this tournament, meaning had either player been booked ahead of kick-off, they would already be walking a tightrope.

“We were prepared to pay fines that would normally apply to breaches of kit regulations and had a strong commitment to wearing the armband. However, we cannot put our players in the situation where they might be booked or even forced to leave the field of play,” the statement continued.

“We are very frustrated by the FIFA decision which we believe is unprecedented – we wrote to FIFA in September informing them of our wish to wear the OneLove armband to actively support inclusion in football, and had no response.

“Our players and coaches are disappointed – they are strong supporters of inclusion and will show support in other ways.”

Former Lioness Alex Scott was seen wearing the OneLove armband on air as she presented the BBC’s coverage of the England game in Doha.

Pride in Football, which represents LGBT+ fan groups in the UK, wrote on Twitter: “England may not be wearing the #OneLove armband, but @AlexScott is right now on BBC.

“This is more than just LGBTQ+ rights, this is Human Rights.”